Can You Imagine? Just before aliens finally visit planet Earth, they decide to watch the Earthling’s mainstream news and try and suss us out.  If they did, perhaps they would get the impression that we are…less than friendly beings?

Even for us Earthlings, watching the constant stream of negativity pumped out in the ‘news’, we can be left feeling despondent, anxious and with less hope for the future. However, the media’s version of events is heavily skewed in favor of those types of negative story. Why is that? Well, that’s a subject for another post.

In reality, deep down inside, most of us know that the good outweighs the bad by some distance. Simply put, Humanity is awesome and the light is winning!

1. Mike Byrney wrote: I’m on the LA metro, coming through Compton. I’ve seen 3 separate people, all gang tatted up, hold this woman’s wheelchair steady without her even asking. Faith in humanity restored.

2. The appearance of our fellow man can be, and regularly is, very deceptive.

4. Here, if you’re hungry and have no money, you can still eat. 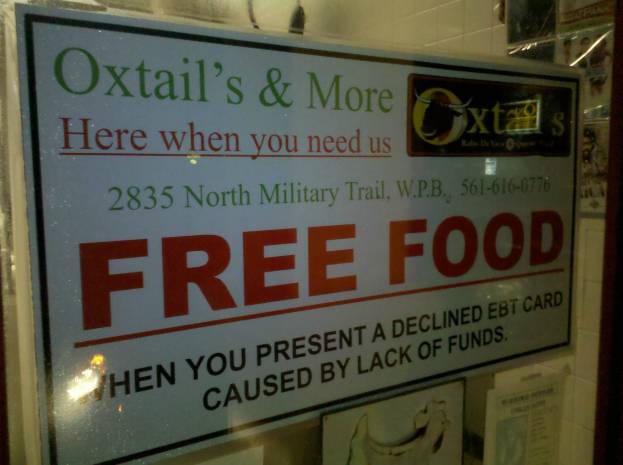 5. ryclectic’ wrote: “My Buddy Witnessed an Act of Utter Kindness Today…While he was standing on the corner waiting for the crosswalk he saw this woman buy two meals at a street vender and go sit down beside this man and give him one of the meals. She proceeded to introduce herself and talk to him about his life and just shot the [breeze] with him. She wasn’t acting superior, she was his equal, she just wanted to talk to and express inclusion to a fellow human being.” 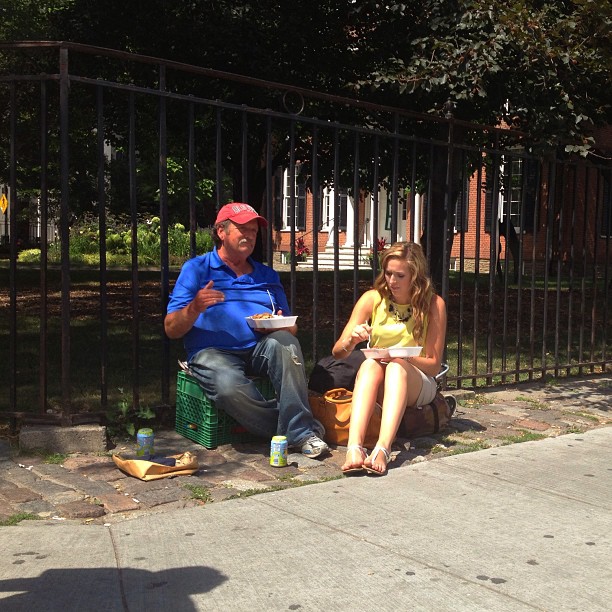 6. ‘IHateWolves’ wrote: I saw a kid walking with who i can safely assume is his girlfriend. She had a bunch of flowers in her hand. They were walking and then he stops and pulls out a piece of paper I assume was a poem. The whole time she stood like this and cried. Faith in the youth of humanity restored. 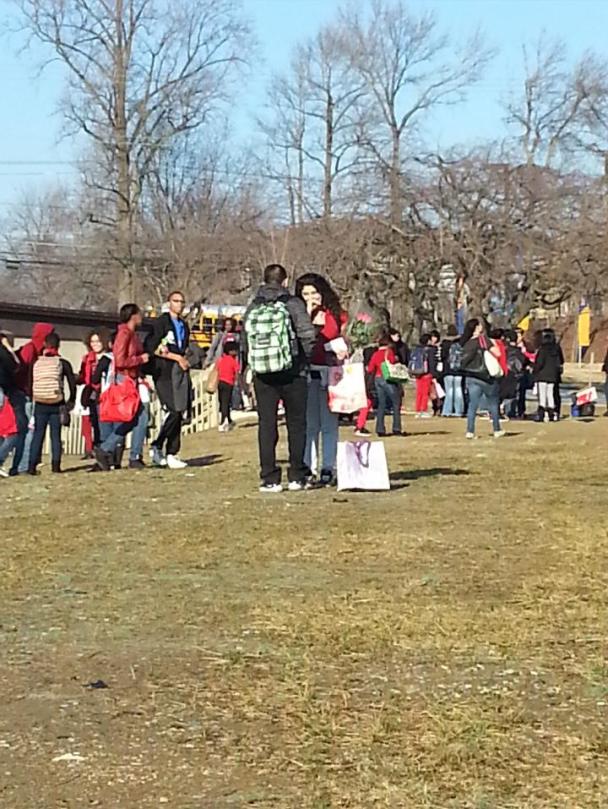 7. This is a picture of a chap called Tully holding a 46 year old, wheelchair bound man with severe mental handicaps. Tully picked him up so he could go on the hay ride with everyone else. 5 minutes into the ride the man got so excited that he peed all over himself and Tully. Tully sat there soaked in pee for the remainder of the 40 minute hay ride. As soon as it was over he changed the mans clothes before his own. If that doesn’t show character we don’t know what does. 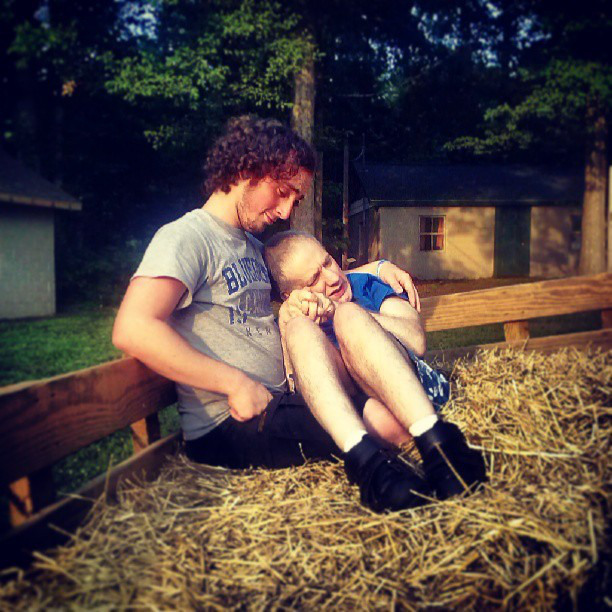 9. ‘Whiskkas’ wrote, “While waiting tables tonight, a mother and daughter started crying mid-meal. I had no idea what happened until a single guy at the table next to them handed me this note with his bill. Faith in humanity, restored.” 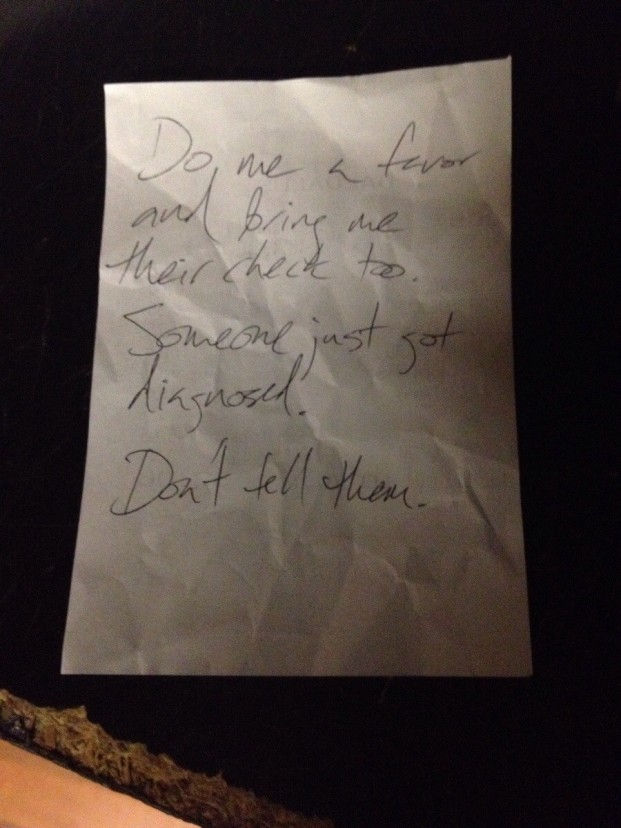 10. What a simple, but brilliant idea. Suspended kindness!

11. ‘giuse85’ wrote: Girl skips the line at the check-in passing in front of me. I tell her it wasn’t very nice of her. I receive this and candy during the flight. Faith in humanity: restored. 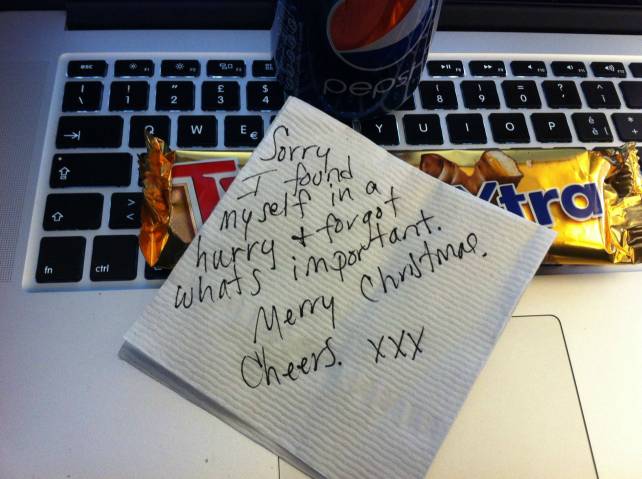 12. ‘Johspwns’ wrote: This guy lent a homeless man his phone at the train station to let him call his mom and tell her that his bike tire was flat and he’d be late to visit her, faith in humanity restored. 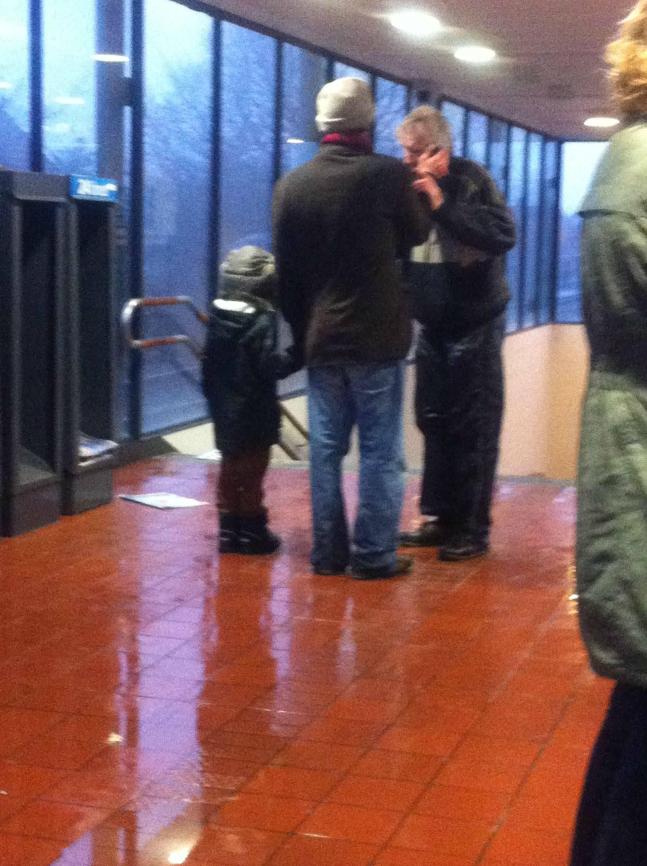 13. HM wrote: Faith in humanity restored as people risk their lives on a busy highway to save a runaway dog (I was in a hot air balloon).

14. Concern, care and gentle advice from a stranger. 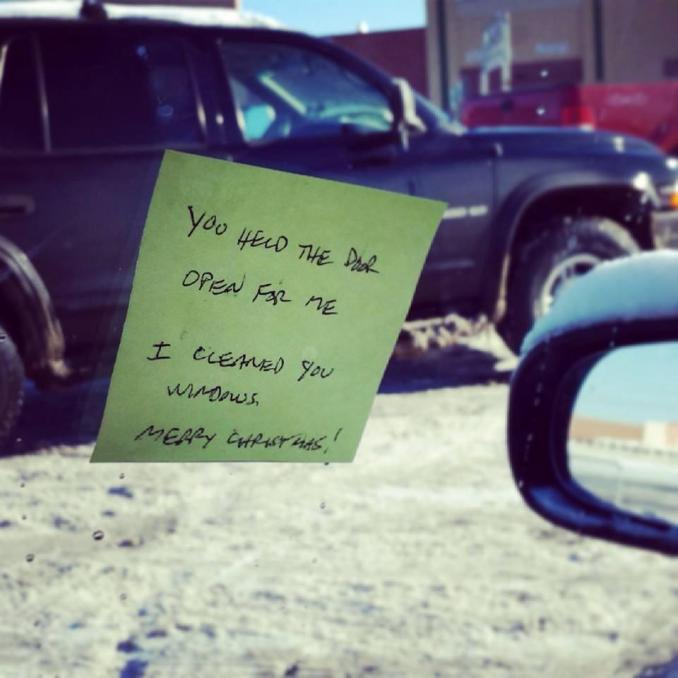 17. ‘YeOldeEnglishKnave’ wrote: Had 10 inches of snow last night. Been stuck in traffic for 7 hours on a drive which usually takes 25 minutes. These kind people who live near bye are offering free tea or coffee to the drivers. Faith in humanity restored!

18. Nonprofit Group Turns Bus Into a Bathroom for the Homeless. The former public transit bus has been outfitted with two full private bathrooms and offers hot showers, clean toilets, shampoo, soap and towels free of charge. The founder of the nonprofit Lava Mae mobile shower bus said she wanted to return a sense of dignity to those living on the streets.

20. I will not let you go. This woman spent 3 hours holding the horse’s head above the tide after it got stuck in the mud on a beach in Australia. The horse was later rescued, unharmed. 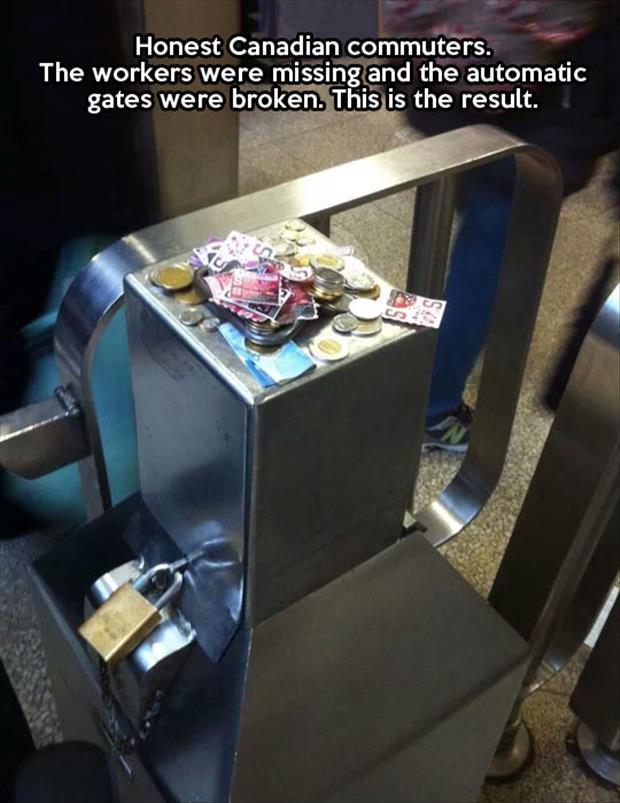 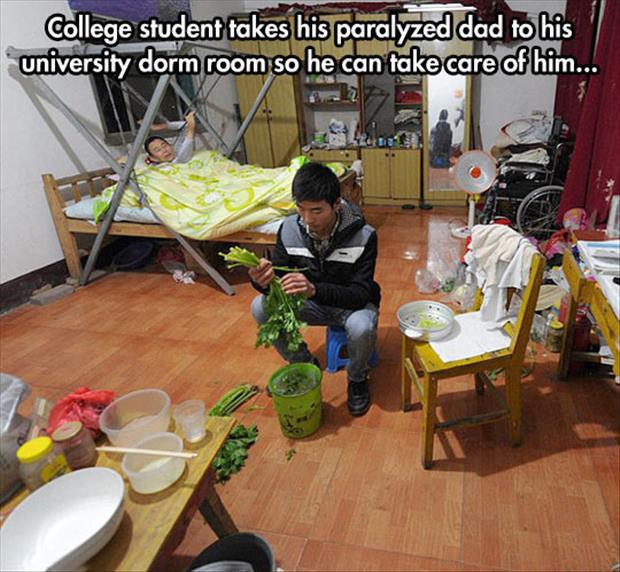 25. Strangers Leave her Money While She Gently Sleeps. “alexthegreat90″ wrote: “I took this picture this morning. Ever been somewhere and seen something that amazed you? I’m at the east side McDonald’s and this lady was sitting in front of me sleeping. She has everything she owns in a small backpack. Curled up with her blanket she sleeps not knowing what is going on around her. While she is sleeping everyone is getting their money out and putting it on the table so it’s there when she wakes up.” 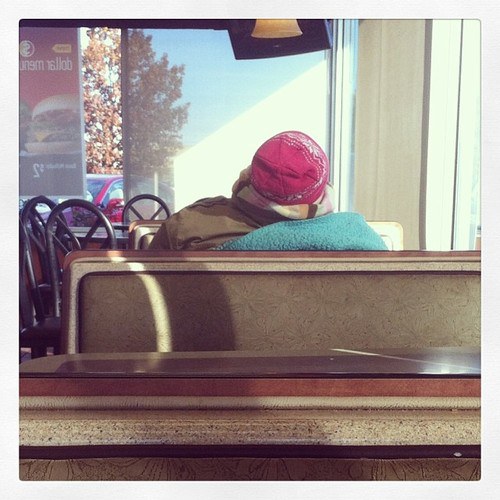 27. The guys next to them only left the waitress 40 cents. Faith in humanity restored.

28. Moments after posing for a fun photograph at a local beauty spot, brave teenager Cheng Changjiang was dead. Despite being unable to swim, Cheng, 18, waded into the lake to save the lives of three young children who had got into trouble in the water. But the brave act cost the teenager – branded a ‘hero’ by onlookers – his life. Cheng was enjoying the public holiday at the rural spot in Xinyang, at Henan province in central China, when tragedy struck. 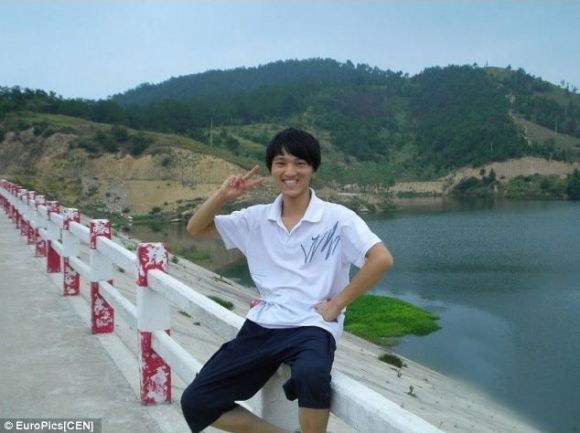 29. A girl saw this poor man, bought him a boxed lunch, and gently fed him. 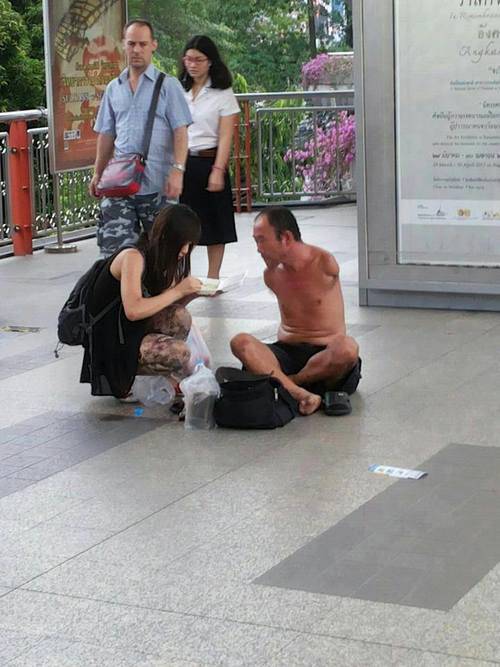 31. This is Krishnadas, a man who stands everyday for hours on end at Juhu Circle in Mumbai with a sign that says;‘Apne dharm par chalo, sabse prem karo (Follow your religion, love everybody)’.

32. An elderly person passed away in the waiting hall of the Shanxi Taiyuan train station, China. A monk who happened to be waiting for his train went forth, held the deceased’s hand, and proceeded to bless him.

33. “This picture was taken in Tenganan Village, Bali (2010). Tenganan is the most famous Bali Aga (original Balinese) village and is located close to Candi Dasa in East Bali. A man was playing bamboo music to entertain a disabled child which is not his son, but he loves this child likes he loves his own son.”

34. This interaction between a Guatemalan girl and a tourist she just met, beautifully captures their shared happiness and humanity.

When we pay attention to what is going on around us, we easily notice many small acts of kindness occurring everyday. From spotting a simple smile shared between strangers through to learning about more substantive acts of material kindness, we Earthlings (and the watching aliens) can be certain of one thing…Humanity is awesome!