It played out somewhere between a Keystone Cops comedy and one of those movies about a guardian angel – and it started with a 911 call.

The bride-to-be was packing her car near her Kent home for her wedding, went back inside for another load and came out to find her wedding dress had been stolen.

That was Sunday morning.

The wedding was scheduled for Sunday evening.

The distraught woman called 911 to report the theft. The person who answered was Candice, who works for Valley Communications, the regional 911 center that picks up emergency calls for South King County communities. 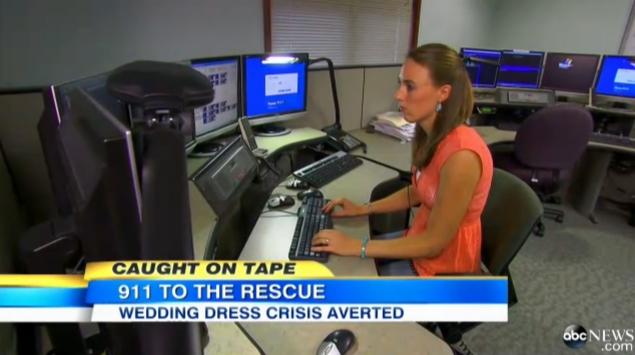 A five-year veteran call receiver, Candice had handled people in crisis before. She calmed the woman, got the story and asked for details to pass to police officers for a theft report.

“I finally figured out what was going on, and asked when the ceremony was scheduled,” she said. “When she said ‘today,’ my heart broke in two for her.”

Candice did her job, and a police officer was dispatched to meet the woman. As soon as she disconnected the call, she turned to her supervisor and asked a question likely never heard in a 911 center before.

Candice and husband Brandon, who live just outside Tacoma, were married 18 months ago. Tall and lean, she had no idea if her dress would fit this bride-to-be whom she’d never met. But her supervisor said she could offer it.

“I talked to the officer responding and told him to tell her I’d offer her my dress,” Candice said.

The officer asked, and the woman said she’d like to see a picture of it.

“I understood completely,” Candice said. “This was such a special day for her, something she’d thought of her whole life.”

Candice texted a photo of herself wearing the wedding dress to the responding police officer’s telephone, and he showed it to the woman.

She liked what she saw, thought it would fit her.

Now all they needed was the dress, which was stored somewhere in her parents’ Gig Harbor home – and her parents were out of town.

Candice sent her parents, Calvin and Patty Luce, the kind of text message no one wants to get.

“It said ‘Emergency! Call me.’ and gave her number at the 911 center,” Calvin Luce said. “We’d never called her there before. She can’t even take a cell phone into the center.

“My first thought was that my father had died,” he said. “We called and the first thing Candice said was ‘everything is alright. Where’s my wedding dress?’”

It was in the Luce attic, along with her mother’s.

Candice called her husband, who wasn’t supposed to be home. Brandon should have been camping but hadn’t felt well.

She asked if he’d drive to Gig Harbor to get the dress. First, he’d have to stop in Tacoma and get a key from her brother, James.

“Brandon went by and got the key, then drove to the house in Gig Harbor and the key didn’t work,” Candice said. “He called my brother back, and it turned out he’d given him the wrong key. So my brother drove to Gig Harbor with the right key.”

James and Brandon got into the house, into the attic, and found the dress.

Brandon called his wife and asked where to deliver it. Candice worked the telephone, learned that the bride-to-be was already getting ready, but that her fiance was at home in Kent.

“Brandon drove the dress to the fiance’s house and dropped it off,” Candice said. “The woman told me she’d get it back to me, and I said ‘No hurry.’”

The wedding went well. On Monday morning, Candice got a text from the bride and groom, thanking her again.

“Candice is an extraordinary person,” said her Valley Com operations manager, Vonnie Mayer. “She had something someone else needed, and she made it happen.”

Candice asked not to be identified by her full name for this column, for professional and safety reasons. She also didn’t want the attention focused on her.

But her father is proud. He’s the one who contacted the newspaper and shared a photo of his daughter trying on her wedding dress.

“She has always been very generous, always thinking of other people,” Calvin Luce said. 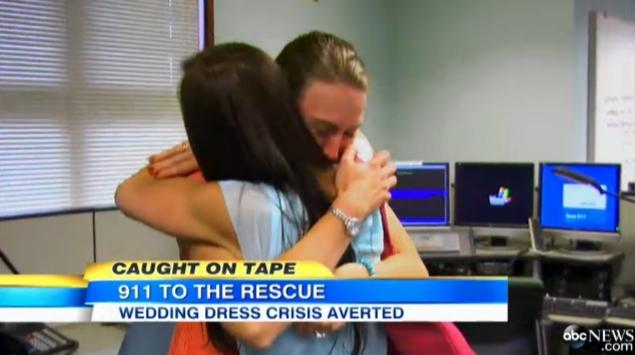