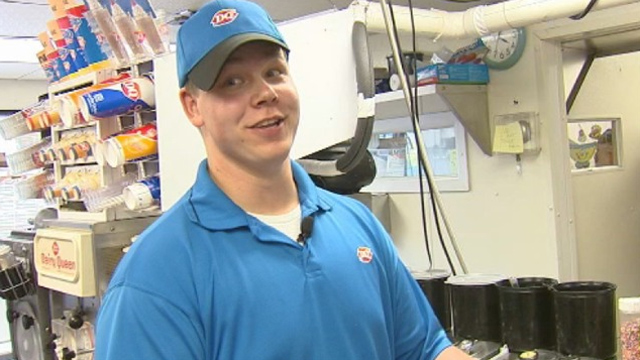 Humble, and hard-working, Joey Prusak is being called a Good Samaritan — but he doesn’t care for the title.

The owners of the Dairy Queen on Main Street in Hopkins had no idea what happened until they got an anonymous e-mail passed along from corporate.

It starts off reading: “Dear owner, I was at your store on September 10th having lunch. I was in line as one of your employees was serving a gentleman.”

Prusak told FOX 9 News the man was a regular customer.

“He always pays with a debit card,” Prusak said. “I don’t know if he is partially blind or fully blind or what the situation is.”

While paying, the man unknowingly dropped a $20 bill on the ground. Prusak watched as the woman standing in line behind the customer picked it up the money and put it in her purse.

The witness’s letter goes onto say, “Before I could say something to her, your employee stepped in. He politely asked her to give the money back to the young man who was blind.”

In the letter the owners received, the witness said she never expected what happened next.

“Your employee approached the man and took out his wallet and said, ‘Sir, on behalf of the Dairy Queen, I would like to give you the $20 you dropped on the ground.”

After reading the anonymous letter, Prusak’s boss, Nancy Pettit, posted the letter for all her employees to read. Someone also put it on Facebook, and from there, it went viral. In fact, Prusak spent much of his Wednesday talking to reporters from around the country, including Yahoo News and the Huffington Post.

“It’s nice to see a young man do the right thing and get recognized for it,” Pettit said. “I just feel very blessed to have such a wonderful young man working at my shop.”

While FOX9 cameras were at the Dairy Queen on Main Street in Hopkins, another customer who heard about the story decided to pay it forward, handing Prusak 20 bucks.

“It’s nice to know there are still people like that in this world,” said Angela Reed.

That wasn’t the first “reward” Prusak has received since the letter starting circulating. He says he would prefer not to take the money and would rather just assume others will do what he did.

“I didn’t expect anything, nor did I want anything,” Prusak said. “It wasn’t anything I wouldn’t have done on any other day. I hope everyone else would have done the same thing — which I think 99 out of 100 people would have.”