Renee Ly, a Milton mother of two, was dying of liver disease. Her 21-year-old neighbour saved her life. 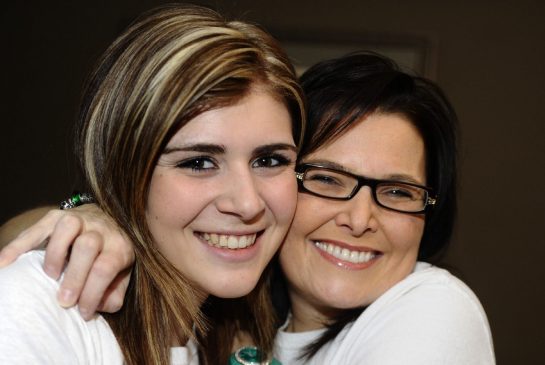 Neighbours Renee Ly, right, grabs neighbour Erica Tomlinson, who gave Ly a new lease on life when she gave her neighbour 70 per cent of her liver.

“We say, ‘Isn’t it so weird to think Erica is here, and her liver’s next door?’” she says.

Everyone laughs. But it’s not actually a joke.

Schell’s daughter, 21-year-old Erica Tomlinson, donated most of her liver to their neighbour, Renee Ly, on Nov. 20, 2013.

As a living donor, Tomlinson underwent surgery that removed about 70 per cent of her liver. It was transplanted into Ly, in the adjacent operating room at Toronto General Hospital. Tomlinson’s liver will have regenerated completely by this time next month.

The families have been friendly since Ly, 39, moved into the house next door on McLaughlin Ave. in 2010, with her husband and two sons.

“It started off borrowing a cup of sugar or some milk, it turned into borrowing a liver,” says Tomlinson, laughing.

Ly was diagnosed in 2009 with a rare liver disease, primary sclerosing cholangitis. Within a couple years the disease was attacking her spleen, her heart, her lymph nodes. She was sick, raising two adolescent sons.

Tomlinson started thinking about it as soon as she heard.