Harold Krueger, a three-time war veteran who lives in North Dakota, recently lost his wife, LaVina, of 63 years. He turned 90 last week, and LaVina had planned on throwing him a party. After her death, Krueger’s daughter, Debra Turner, took over the celebration and turned to Facebook for help. 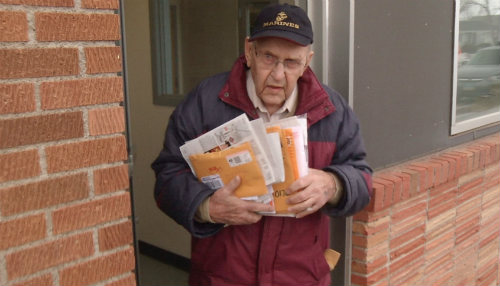 “Maybe if I put it on Facebook, and ask some of my friends if they would send my dad a card he might get a few letters and some mail,” Turner told KFYR. “I gave a little background of his military, and his life and asked. That’s all I meant was for him to have a couple letters.”

Turner got a lot more than she expected. Her post was shared 650 times, and her father received about 1,000 birthday cards and letters from people in 48 different states. Turner said the cards helped cheer him up in the midst of coping with his wife’s death.

“She was the one I wanted, and I got her,” Krueger told KFYR. “It’s very hard. Yeah, I still miss her very much. I tear up fast.”