Not only are dogs man’s best friend, but it has been said that dogs are also our link to paradise. If you want to know true love, true friendship and true happiness, then you need to know a dog. This story of a dog named Mason shows you why both of those things are true.

This is Steve Mason, the most incredible dog I have ever met and my best friend of the past 16 years. And this is the story of how he died saving my life one last time.

Steve Mason, “Mason” to his friends was a Husky, Lab, Rottweiler mutt with insanely fluffy ears and markings on his face that made it look like he was always wearing Harry Potter specs. I picked him out of a litter of puppies because while all the others yipped and squealed and played, he was the only one to stop and snuffle the flowers.

He always had this way of perking up his ears that could spur me to keep going, either to the top of a ridge line or out of what ever ridiculous angst I found myself muddled in.

He was obsessed with shortening sticks and tearing up any cardboard he could find. He was extremely meticulous and many a vacuum clear died trying to tidy up his messes.

Mason was a best friend and rock steady companion for my older brother and a traveling companion like no other. And every time he saw my brother, even if five years had gone by, he’d still try and jump in his arms like a puppy.

Everyone who met him came away saying that he was a remarkable dog, and many could honestly say he was the nicest person they’d ever met.

Over the past two years he began to show his age. His hearing and much of his eyesight abandoned him, along with his sense of balance.

I kept expecting him to die in his sleep or collapse on a hike.

My worst fear was that he would grow so old and infirm that we’d have to put him down. I honestly didn’t think I’d be able to go through what I’ve had to do for so many other dogs with him. He was far too special. He just seemed so old.

But he just kept on going, refusing to take it easy. He moved slower, and couldn’t go as far, but he never seemed to mind.

This winter I’d been sure to get as many adventures in with him as possible, knowing our days together might be numbered. On March 5th, he and I, along with my family’s three younger dogs took off for what was meant to be a quick hike around our property before I had to go to work.

We were about a mile from home on our snowshoe trail when I noticed a figure following us about a quarter mile back. I recognized it as a wolf right away. I hadn’t seen a wolf in my valley for about fifteen years, but wolves are shy and usually hide from humans, especially one with four dogs. Trying to be respectful, I turned us towards home, thinking we’d give the wolf room to escape and think no more about it.

A few minutes later the littlest dog gave a bark and I turned to see the wolf standing five feet behind us. She was huge, her shoulder nearly coming up to my hip. She looked scared but determined, and most of all she looked hungry. We were in trouble. She attacked and we spent the next twenty minutes trying to fight her off. I was hitting her with my ski poles while the dogs nipped and tried to avoid her teeth. She was weak but a good fighter. 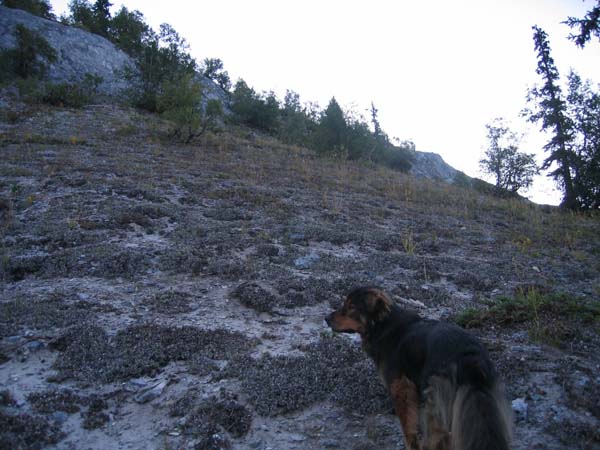 Mason and I ended up fighting side-by-side. The wolf kept staring me in the eyes, but it was clear she was after the dogs. She finally pinned the smallest dog and Mason lunged at her. Suddenly my frail old man looked huge, bigger than I’d ever seen him before. He knocked her off the puppy, but she got Mason by the throat. It was over in a split second. I have never screamed so loud. Every fiber in my being was telling me to kill her, stab her in the eye, tear her throat out if I could. But that would have only gotten me killed too, and there were three other dogs I had to get out of there. It was too late anyway. He was dead and she was eating him. 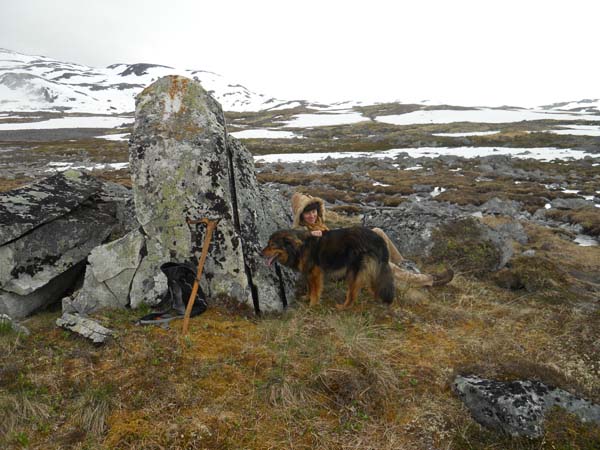 This is the wolf. This picture was taken the morning after by some guards and the nearby border station when she wandered past. Though all I wanted to do in the moment was kill her, she really is one of the most beautiful things I’ve ever seen. And now that it’s done, I hold no hate for her. She was starving to death and did what she had to to survive. I think she went into the fight knowing she might be the one to get killed, and it was simply the luck of the draw that she got him first. I only hope she leaves this valley safely.

I miss Mason like there is a hole in my chest. Though I know there was nothing else I could have done, I can’t escape the thought that I failed to save him. But most dogs at sixteen die bye the fireside, slowly and painfully of old age. Mason went out of this world like a thunderbolt, saving my life and the lives of the three younger dogs. He was my puppy, my “grizzly”, my brother, my friend, and he died as he lived: My hero. I love you, buddy. Goodbye.

Even though Mason was old and tired, he was willing to give up his own life to protect those he loved. That’s why dogs are man’s best friend; they love us wildly and truly.

Everyone who met him came away saying that he was a remarkable dog, and many could honestly say he was the nicest person they’d ever met.
Read more at http://www.viralnova.com/mason-the-dog-eulogy/#Mx7WcWgkClB5gozB.99