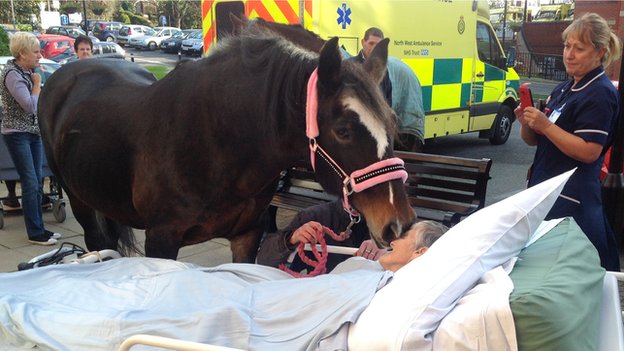 A cancer patient has died after a final farewell to her favourite horse outside the hospital where she was treated.

Staff at Royal Albert Edward Infirmary in Wigan granted Sheila Marsh’s last wish, by arranging a visit from two of her horses on Monday afternoon.

The hospital said the 77-year-old, unable to speak properly due to illness, “gently called” her favourite horse, who then nuzzled her cheek.

The grandmother from Wigan had six horses, three dogs, three cats and other animals.

But after a farewell visit from one of her dogs last weekend, she told hospital staff of her wish to see her favourite horse Bronwen, who she had looked after for the previous 25 years.

They arranged for Bronwen and another horse to come to the hospital car park, where nurses wheeled Mrs Marsh in her bed.

“Sheila gently called to Bronwen and the horse bent down tenderly and kissed her on the cheek as they said their last goodbyes.”

Mrs Marsh’s daughter Tina said: “It was very important for my mum. She was one of the most hard-working people that you could meet and she would do anything for anyone.”

“This was obviously extremely important to [Mrs Marsh] and her family and we feel privileged to have been able to provide this support at this crucial stage of her care,” she said.

“It is absolutely right that we should pull out all the stops to ensure that our patients and their families receive personalised, compassionate and dignified care at the end of their life and this is what we will always strive to achieve.”