His mum says the attention it’s received has cheered her up while they’re waiting for her son’s final appointment with the oncologist after beating cancer.

This is a love letter between Bennet and Baily, both age 4. It was posted on Reddit recently and has been going viral ever since.

Will you please come to my house? Let’s play together. I think you are pretty like a horse or a ladybug. I’m not sure which. You should come to my house and eat cheeses with me. I love you and I lost a tooth last night. I think I would like to do a magic trick for you and then let you watch me battle robots.

BuzzFeed News got in touch with Bennet’s mum to ask about how Bennet and Baily were doing now.

Bennet got the idea to write a letter when he saw his mum writing an email to a friend:

“I asked him who he wanted to send a letter to and he stated, “Baily of course”. So, he sat down next to me on the couch and dictated the letter and I typed word for word what he said.”

Bennet and Baily have been in school together for two years:

“He talks constantly about her and how much he loves her “yellow hair”. He will be having his 5th birthday party in a few weeks and the theme is knights and princesses, he is over the moon knowing that Baily will be dressed as a princess.”

Jennifer thinks people have really responded to the letter because it was so honest. 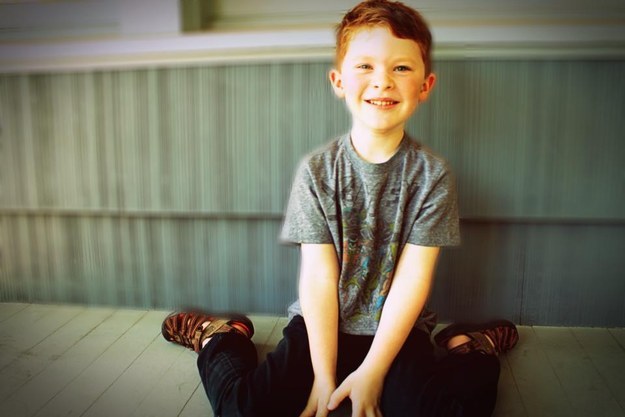 “He loves “cheeses” , battling a box robot I made him, and he did just lose a tooth and since he was the first in his class to do so, what little girl wouldn’t be impressed?

Of course Baily is a bit awkward at just 4 years old and really doesn’t know what to think about Bennet. Honestly, I think he overwhelms her a bit.”

Jennifer says the attention the letter has received has cheered her up while waiting for Bennet’s chemotherapy sessions.

“I have to say that the attention the letter has received has put a smile on my face, as Bennet was a very sick kid. He was diagnosed with cancer at 6 months old and actually goes up for one of his last cancer checks in Portland, Oregon very soon. I’m always nervous about these checks and this has been a nice distraction.”