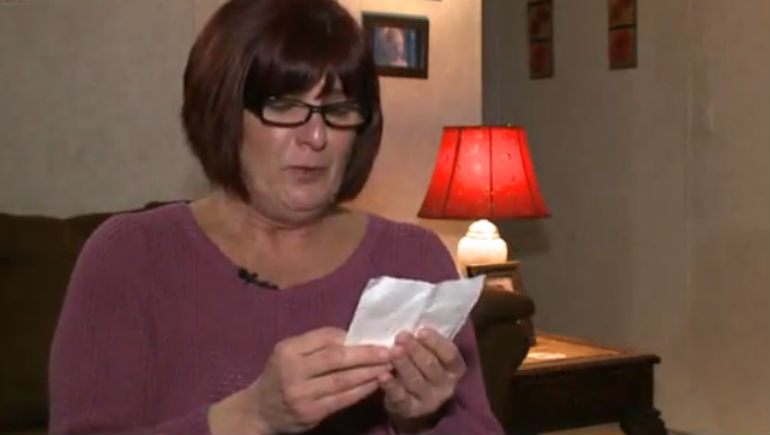 While there is nothing worse than losing a child, kindness and support can make the nightmare a tad more bearable.

For Kathie McKernan of Massillon, OH, and her husband, Michael Foehrenbach, the selfless act of two strangers was encouragement on the worst day of her life.

On New Year’s Eve, Kathie received word that her 29-year-old son, Robert McKernan, had been killed by his wife . . . a shock that no mother ever wants to face. The New Year began with tears and loss for Kathie and her husband, Michael Foehrenbach, who began making funeral arrangements for their son on New Year’s Day.

When they finished the painful process of deciding how to bury a child who was taken far too soon, Kathie and Michael were understandably distraught and exhausted.

When the grieving couple stopped at a restaurant to regroup after completing their son’s arrangements, they had no idea that they’d leave crying happy tears instead of sad ones.

After noticing the visibly upset pair, another couple in the local eatery bought Kathie and Michael drinks . . . but that wasn’t all. When the anonymous couple left the restaurant, they asked a hostess to deliver a note to the mourning parents.

Inside was a $100 bill and a sweet sentiment scrawled on a napkin:

His wife echoed the sentiment, tearfully dubbing them angels.

The gift-giving couple had never been seen in the restaurant before and didn’t stay to receive any recognition for their gesture. They simply wanted to help another couple who were obviously going through a tough time.

They came and went from their lives to only bring a smile on Kathie and Michael’s faces during their tragic time – an undoubtedly angelic gesture.

While the heartbreak of a lost son is indescribable, the selflessness of others is enough to brighten even the darkest of days.