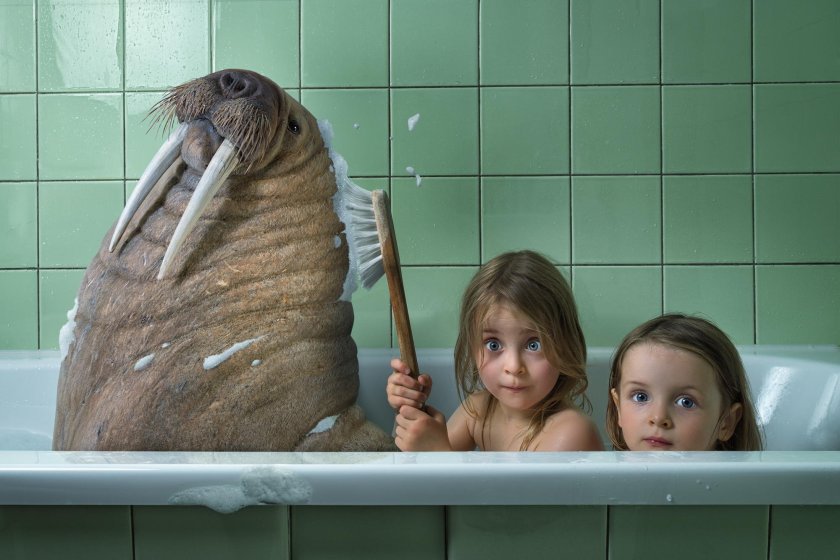 1. Bathe the kids every day.

Children, unless they’ve been rolling in the mud, do not need a bath every day. In the summer I rinse off sand, sweat and sunscreen pretty much daily, but in the winter it just makes their skin dry and rashy. Twice-a-week baths are fine and save me the soggy wrestling match that is washing a screaming toddler and preschooler.

2. Do an elaborate bedtime routine.

Literally everyone told us we needed to do a bedtime routine. Bath, infant massage, dim lights while nursing—this was bad enough and clocked in at about an hour. Now, with our 4-year-old, more rituals have crept in, like:

The bedtime routine starts at 3:45. In the interest of recapturing those hours, I’m eliminating all but tooth-brushing and prayers, which, mumbled at high speed while inching towards the cocktail cabinet, are more true to my Episcopalian faith anyway.

I’ve spent the last five years standing in the fruit aisle debating whether to spend $2 for an organic apple or 50 cents for a regular one, and then, confused, I buy no apple at all. I am just not going to worry about it anymore. It’s better that they eat fruits and vegetables than not, and we can’t spend $200 a week on apples.

4. Force my kids to eat vegetables.

With my first child, we forced him to eat a certain number of bites of his dinner to get dessert. This resulted in bargains and negotiations and debates over exactly how much food on the fork counted as a “bite.” (It was a little like arguing how many angels can fit on the head of a pin.)

By the time my second arrived, we started following Ellyn Satter‘s division of responsibility, which makes meals a lot more peaceful. I mean, mostly.

My son sat down at the table the other night, looked at what I’d made, and said, “This looks like an old head.”

So yeah, it’s not all wine and roses, but at least I’m not squabbling about whether gently touching your tongue to a piece of broccoli counts as a bite.

I try so, so hard to control my temper. But sometimes, one child is repeatedly pressing the “Oh Susannah” button on his music machine, the phone is ringing and I can’t find it, the oatmeal is burning, and the other child is experimenting with asking questions in a barely audible voice. (Remember the scene in The Office when Michael Scott negotiates for a raise by speaking very softly? This is what my son is doing.) And then sometimes I lose my temper.

But the thing is—it’s not good for children to have infinitely patient, saintly mothers, because the world is not infinitely patient and saintly. Normal people lose their shit at too much loud-noise stimulus and burgeoning stove fires and a child requesting a cheese stick without moving his lips. It’s good for kids to recognize the incipient stages of someone losing their shit. This will serve them well in the world.

6. Have a perfectly clean house.

A friend recently said, “I wish I had known that motherhood is really just becoming a cleaning lady.”

And it’s true. I clean the kitchen four times a day. I scrape things off the floor with my fingernails. I pick up so many little balled-up socks. But now—partly because I hate to clean, and partly because I think kids, especially boys, shouldn’t think that someone is always going to pick up after them—I’ve started a gentle insistence that they put their clothes in the hamper with no intermediate stop on the floor, that they return their bath toys to the basket, and that they help out with weekly dusting and vacuuming.

It would be quicker to do it myself, and the house isn’t especially clean, but I hate feeling like a martyr. I’d rather have a slightly dirty house than be a servant, and eventually they’ll learn that small daily efforts are better for housekeeping than quarterly fumigations.

7. Spend all weekend with my kids.

The No. 1 thing I miss about singledom is time alone at home, to non-productively putter. So we’re starting a half-day-off policy; like the servants in Downton Abbey, we each get from 8 a.m. to noon, once a week, with no kids, work, or chores responsibilities. The other parent takes the kids out of the house. I am going to put spare change in the change jar and corral all my hair elastics and stack random pieces of paper on my desk. It’s going to be glorious.

Leigh Anderson is the author of The Games Bible (Workman, 2010) and has contributed articles to Men’s Health, Jane, Newsweek.com, Parenting, and Salon.
Connect with Leigh on Twitter