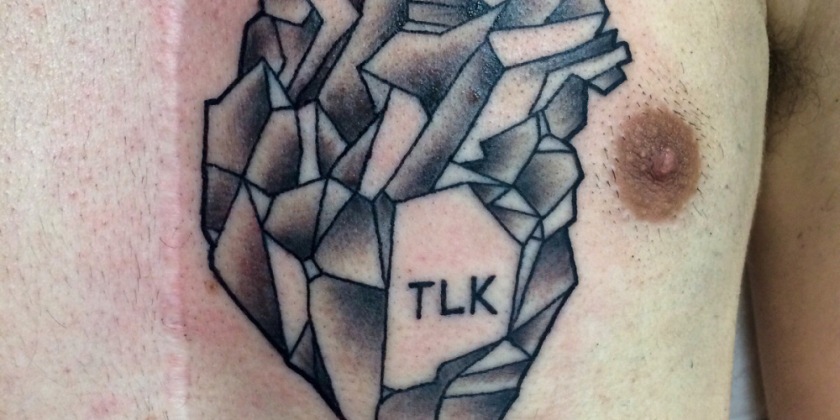 It started with an earache.

At 12 years old, Florida resident Tim L.—better known on Reddit as user ‘MoTioNz’—went to the doctor for a routine checkup. Though the boy complained of ear pain, the doctor examined his heart as well and discovered an unrelated arrhythmia.

He referred Tim to a specialist at a nearby hospital, where the 12-year-old received a startling diagnosis: dilated cardiomyopathy, a possibly life-threatening disease of the heart muscle.

“Basically my heart was too big and wasn’t pumping blood properly,” Tim explains.

To correct the problem, the cardiologist implanted a pacemaker, but in the nearly two years that followed, Tim’s health declined steadily.

“I was constantly sick,” he remembers. “I had lost nearly half my body weight, and it kept getting worse and worse.”

His doctors informed him that he would need to receive a heart transplant.

“[That] isn’t something every 14 year old wants to hear,” Tim says.

After an improbably short amount of time on the transplant list—just one week—Tim found a donor whose heart wasn’t a match for anyone above him on the list.

“In other words,” he reflects, “I’m an extremely lucky person.”

Although Tim went into the procedure “scared out of [his] mind,” the surgery was a success. His body accepted the new heart, enabling Tim to regain his normal weight and even get back to playing baseball.

Tim can’t remember when he first got the idea to memorialize his donor’s initials, “TLK,” but he notes that many transplant recipients honor their donors through tattoos. However, there are risks involved.

“You’re put on anti-rejection medication after a transplant so that your body doesn’t attack the new foreign organ,” he explains, “so tattoos can be a slight health hazard for us [transplant recipients].”

Tim, now 19 years old, waited until he had returned to good health with fully healed scars before asking his cardiologist to clear him for his first tattoo. 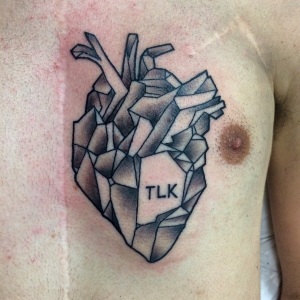 Although he “never really wanted” a tattoo, Tim felt the idea to ink his donor’s initials was “too perfect not to have.” For the design, he chose a geometric, “low poly” design (based on other tats he saw online), inked by artist Scott White at Rise Above Tattoo in Orlando, Fla.

Since the transplant operation nearly six years ago, Tim stayed in touch with his donor’s family.

“Our families are actually very close at this point,” he shares in a comment. “They live about 9 hours from where I live, but we go up there fairly often and go out with them or have dinner at their house.”

When asked if the TLK’s family knows about the new tattoo, Tim replies that he didn’t want to inform them through a Facebook post or text message. Instead, he plans to show them in person during the family’s next visit to Florida.

“I’m excited to see how they react,” he says, noting that his transplant anniversary is November 28.

In the meantime, Tim hopes those touched by his story will consider helping someone else in need. “I’d say if even one person became an organ donor after seeing this, it would be a huge accomplishment,” he says.

“There aren’t many reasons not to register to become a donor, and doing it could save multiple lives. Many people don’t even think about it but it really gives you the chance to be somebody’s hero.”

If you’d like to learn more about registering as an organ donor, visit the US Department of Health & Human Services’ official site.