Following Donald Trump’s offensive comments toward Muslims, one elderly patient decided to show her Muslim doctor that she stands in solidarity with him. 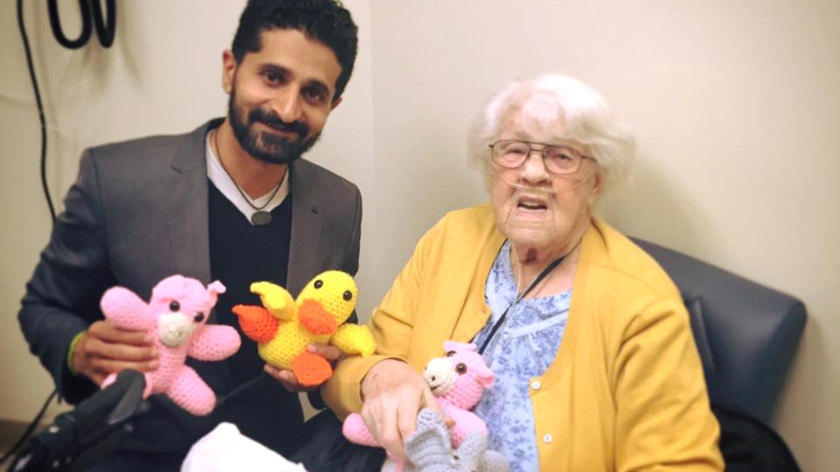 “My 91-year-old patient heard how Trump has been attacking ‘The American Muslim,’ so here she brings me these little stuffed animals that she crocheted herself to cheer me up! And she made my day.

‘The Power of Love is Bigger than the love for Power,’ Mr Trump. You will not win by dividing the American people. She and I are one team and we belong to the Land of the Free and the Home of the Brave! God Bless America!”

The doctor said that the 91-year-old had listened to the radio show and though she didn’t know who Trump is, she felt the presidential candidate’s ideas were hurtful. So when the patient, who happened to have an appointment with the doctor that day, arrived to the office, she gave him the five stuffed animals and offered him some words of support.

“She said,’I want this for you because I can feel your pain and what you’re going through,'” he said, recalling the sweet gesture.

“I had never seen that amount of affection from an unexpected person in that unexpected way. And that was beautiful.”

After Trump attacked Muslims yet again on Monday, calling for a “total and complete shutdown of Muslims entering the United States,” the doctor said that he felt it was time share the picture and show people that though we all come from different walks of life, we can still feel compassion for one another.

He says ultimately the photo tells a powerful lesson.

“Yes, there are wars in the world and there are a lot of bad things, but at the core of everything, there’s a lot of goodness.”

“We have to understand that the majority of the people living in this country are like that 91-year-old woman,”.

“I’m a first-generation immigrant from Pakistan … she’s from rural Idaho. We have completely separate backgrounds and regardless of that, we relate to each other as human beings.”.

“This 91-year-old single-handedly has proven that no matter of how these forces do, no one will be able to destroy us or divide us. In that moment, she threw our differences aside and … she was just a human being trying to be kind and connect.”

The doctor has publicly offered to let Trump spend a day with him on his rounds so the presidential hopeful can get to know “a real American Muslim.”