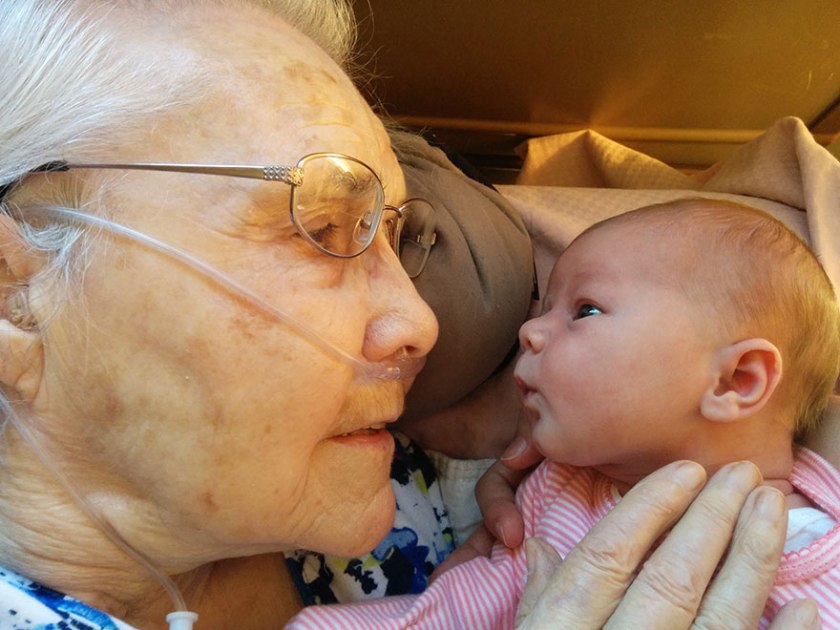 A photo capturing the heartwarming moment a 92-year-old held her baby great-granddaughter for the first time was shared on Reddit, garnering hundreds of comments and shares.

Scott Martin, who posted the photo, said the photo was taken at great-grandma Millie Martin’s house. At just two days old, baby Penelope was clearly as taken with her nana as her nana was with her.

“She was in love from the moment they saw each other,” Scott said. “Pip had just had a diaper change, so she woke up and was wide-eyed for a bit.”

Baby Penelope, who was less than a week old, is the fifth great-grandchild for Millie and the first child for Scott and his wife, Jen.

Think about it for a moment…Nana Millie witnessed the stock market crash, lived through a world war, saw a man walk on the moon and watched as the world became ever more filled with automobiles and other amazing machines and gadgets. Now just imagine what baby Penelope will see?

The little bundle of joy comes just a month after Millie’s husband, Dean, a WWII veteran, passed away.

“I think my grandmother here has been holding on for this moment. This was one of the best days of my life [and] I think it was up there for her, too,” Scott commented on Reddit.

As for baby Penelope, she was an Internet sensation long before she was born. While she was still in utero, she reportedly “clapped” during her mother’s 14-week ultrasound, as shown in the video below.

Please Share a Dose of Cute Using the Buttons Below.