James Harrison was born in 1936. At the age of 13, he underwent major chest surgery, requiring 12 litres of blood. After surgery, he was in the hospital for three months. Realising the blood had saved his life, he made a pledge to start donating blood as soon as he turned eighteen, the then required age.

Mr. Harrison started donating in 1954 and after the first few donations it was discovered that his blood contained an unusually strong and persistent antibody called Rho(D) Immune Globulin. Rho(D) IG is given to Rh(D) negative mothers of unknown or Rh(D) positive babies during and after pregnancy to prevent the creation of antibodies to the blood of a Rh(D) positive child. This antigen sensitization and subsequent incompatibility phenomenon causes Rhesus disease, the most common form of hemolytic disease of the newborn (HDN).

Through the donations of his plasma, Mr. Harrison helped prevent thousands of born and unborn children from dying of HDN. This uniqueness was considered so important, that his life was insured for one million dollars after this discovery[2] and the following research based on his donations created the commercial Anti-D immune globulin commonly known as RhoGAM. His blood plasma derivatives have since been given as treatment to one in ten pregnant women whose blood could potentially become incompatible with that of their children. 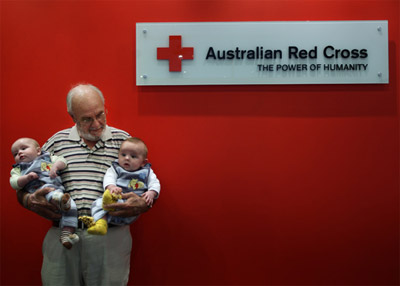 As blood plasma, in contrast to blood, can be donated as often as every 2–3 weeks, he was able to reach his 1000th donation in May 2011. This results in an average of one donation every three weeks during 57 years. Commenting his then record number:

I could say it’s the only record that I hope is broken, because if they do, they have donated a thousand donations.    ~ James Harrison

His donations were estimated to have helped to save over 2.4 million babies with pregnant women being treated with his antibodies, including his own daughter Tracey.