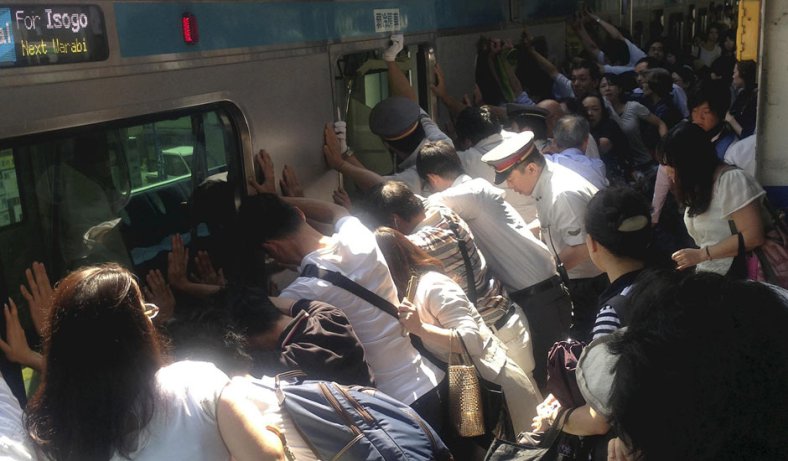 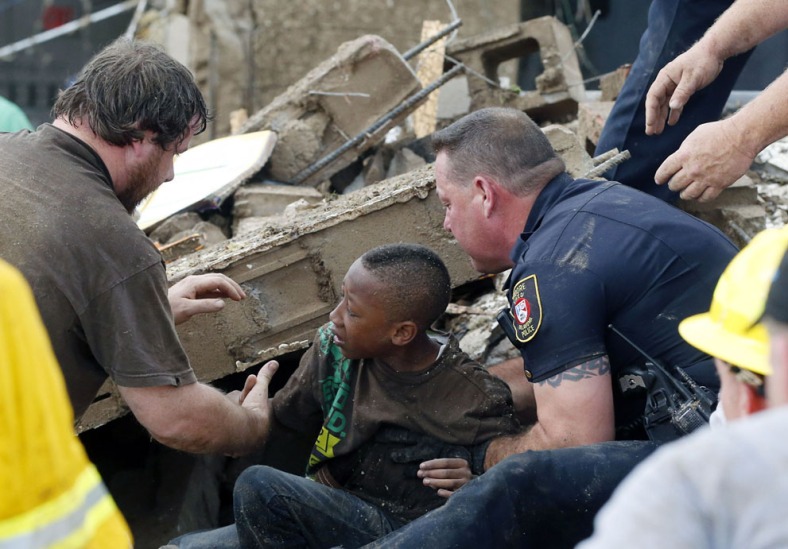 A boy is pulled from beneath a collapsed wall at the Plaza Towers Elementary School, on May 20, 2013. 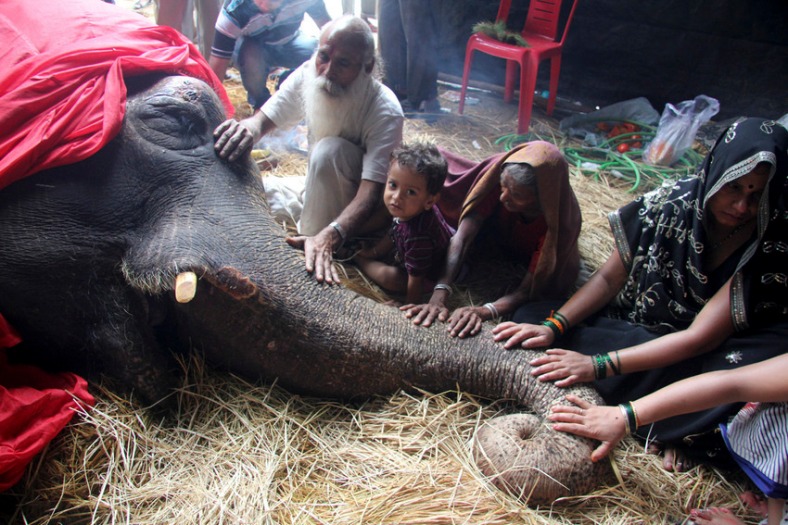 Fisherman Gernot Quaschny rescues a deer from the floods near Schoenhausen, Germany, on June 12, 2013. Due to a broken dike on the Elbe River, several villages in the area were flooded. 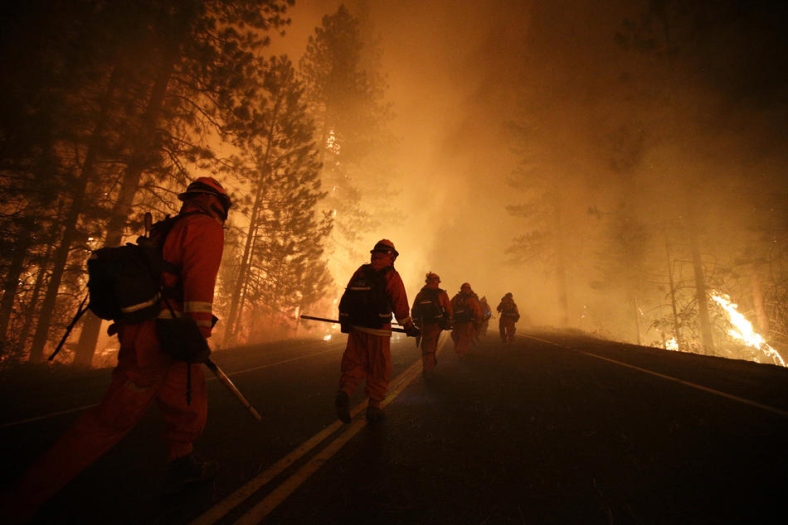 Rescue workers carry a child who was rescued from the rubble at the site of a collapsed residential building in Mumbai, India, in September. Blind Pup saved from a meth lab
Reddit user, ‘Hannernanner’, shared the photo above and wrote;
“Actually, I am in law enforcement. There were many dogs at this residence that were removed by animal control, but considering his disability and how full our animal stays, I knew he wouldn’t last long. So I took him to the vets… They cleaned him up- tested him for parvo and distemper, gave him his shots, wormed him and all… I brought him home, hes happy and I found a home for him w[ith] a friend who can better care for him and devote more time to his disability.” 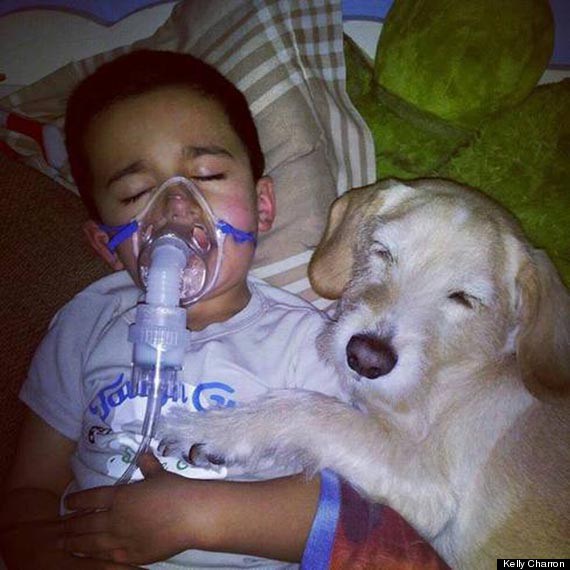 They say laughter is the best medicine; we say a loyal dog is.
Mason and his dog, Prada, are both 5 years old. They’ve lived in Queens, N.Y., since Mason’s mom, Kelly Charon, rescued Prada in April 2012.
Last October, during Superstorm Sandy, their family was exposed to mold after the dining room ceiling collapsed.
Charon told The Huffington Post that Mason and his siblings then began experiencing “chest infection after chest infection.” And in November, when Mason was having difficulty breathing one night, Charon hooked him up to a nebulizer. She left the room after he fell asleep.
When she came back, she found him and Prada [as shown in the photo above]
Charon told HuffPost that Mason and his siblings haven’t gotten sick since the mold was removed from their house. But she’ll never forget this moment.
“It took my breath away,” she said.”

Train passengers and railway staff push a train car to rescue a trapped woman at Minami Urawa station. Photograph: Norihiro Shigeta/AP
Dozens of Japanese commuters pushed a 32-tonne train carriage away from the platform to free a woman who had fallen into the 20cm (8in) gap between it and the platform.
The act of collective heroism was captured by a newspaper photographer.
A public announcement that a passenger was trapped prompted about 40 people to join train officials to push the carriage, whose suspension system allows it to lean to either side, the Yomiuri newspaper reported.
The unnamed woman in her 30s was then pulled out uninjured to applause from onlookers at JR Minami-Urawa station, just north of Tokyo.
After just an eight-minute delay, the train went on its way.

Two teenage boys are being hailed as heroes after they chased a car carrying a kidnapped girl — on their bicycles.
Five-year-old Jocelyn Rojas was playing in her front yard in Lancaster, Pennsylvania, when she vanished Thursday afternoon.
Authorities believe she was abducted by a man who lured her by offering ice cream. For two hours, neighbors and police scoured the area and asked if anyone had seen her. Temar Boggs, 15, and his friend took off on their bicycles to search.
About a half-mile away, they spotted Jocelyn in a sedan. But the driver was elusive.
“Every time we’d go down the street, he’d turn back around, and then … we’ll follow him,” Temar told CNN affiliate WGAL.
The two teens chased the alleged kidnapper on their bikes for 15 heart-pounding minutes. The driver apparently knew he was being followed and gave up.
“He stopped at the end of the hill and let her out, and she ran to me and said that she needed her mom,” Temar said.
Jocelyn’s relatives and neighbors took turns hugging Temar.
“He’s our hero. There is just no words to say,” Jocelyn’s grandmother Tracey Clay said.

Luke saved this fox
This is a picture of Luke Rowles when he was 15. He saw a group of men in a garden, kicking and beating this poor fox whose mouth they had taped up. Luke went charging into the garden with no regard for his own safety, shouted at the men and grabbed the fox. After seeing to its wounds, he released the fox. Now he continues rescuing dogs for RSDR. Brave and compassionate young man with a heart of gold. 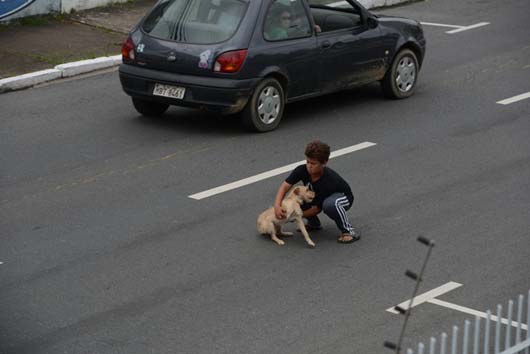 Young boy saves honey
When the little boy saw the puppy getting hit at Rua Lauro Müller, in Itajaí, he just had to help. Jean Fernandes rushed to rescue the little dog.
Honey, the little pup, was hit by a driver who didn’t stop to help either the dog or the little boy.
Thankfully, Honey was not seriously hurt and a vet gave her a clean bill of health. 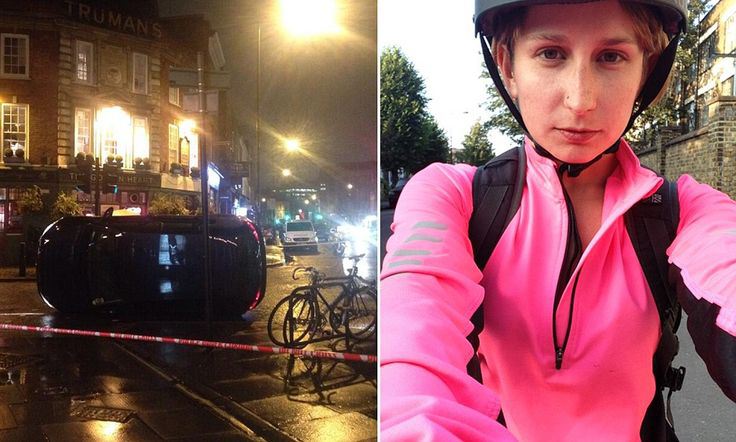 ‘They saved my life’:
Injured cyclist praises passers-by who lifted car off her after she was run over. Claire Pepper suffered only a broken collarbone thanks to rescuers. Around 10 people lifted the car off her following a collision in Spitalfields, east London. 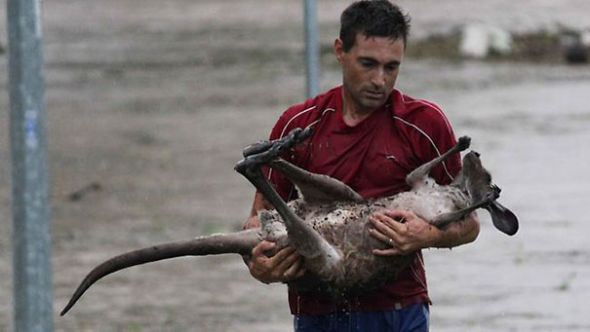 Helping hand: Ray Cole carries the injured joey to safety.
A WILDLIFE warrior who risked his life to rescue a kangaroo in Queensland’s floods is a former Melbourne resident who left Victoria because he “couldn’t stand the weather”. Ray Cole, a father of five, was cheered by onlookers but threatened with arrest by police when he waded into turgid waters to pluck the drowning joey to safety. Mr Cole said “he couldn’t stand there and watch our coat of arms just drown”. “When I was growing up on the streets of Preston we learned and lived by the motto that you reach out and help others,” Mr Cole said. Mr Cole, 39, was among about 50 people gathered at Ipswich’s One Mile Bridge who saw the distressed young animal out of its depth in the fast-flowing torrent.
Picture: Villiers Nick De Source: HWT Image Library

I will not let you go
This woman spent 3 hours holding the horse’s head above the tide after it got stuck in the mud on a beach in Australia. The horse was later rescued, unharmed. 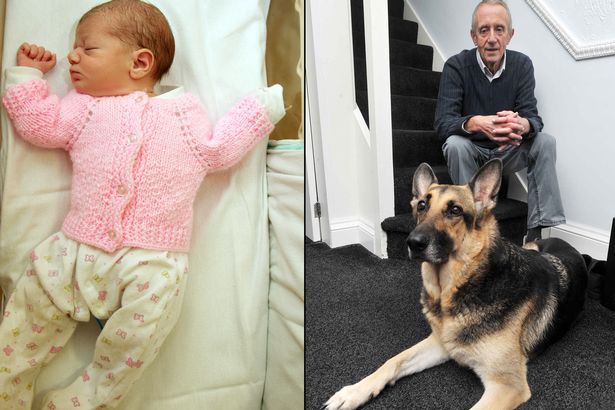 Dog saves newborn baby.
A grandad whose dog discovered an abandoned baby in a Birmingham park spoke about the amazing pet rescue and said: “We were just in the right place at the right time.”
Roger Wilday, 68, was walking German Shepherd Jade in Stechford when she inexplicably raced to bushes, then lay down next to what looked like a discarded carrier bag – and refused to return to him.
As the pensioner moved closer he realised what the loyal family pet had discovered: a newborn baby, who has now been named after her four-legged rescuer.
Roger said: ‘‘I walked over and saw a carrier bag – then I saw it move. I thought it was a bag of kittens, but then I saw her little arms and a head, and the baby started to cry.’
The little girl was taken to Heartlands Hospital where staff named her after hero pet Jade.
On Friday pictures and video were released of the six-pound baby , who was said to be “alert, happy and contented” as she continues to recover. 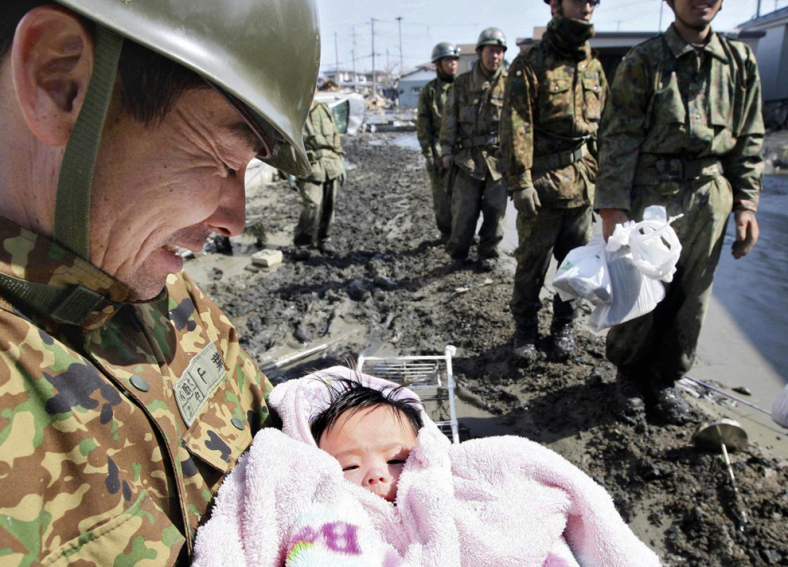 Chinese Teenager Dies Rescuing Children
Moments after posing for a fun photograph at a local beauty spot, brave teenager Cheng Changjiang was dead.
Despite being unable to swim, Cheng, 18, waded into the lake to save the lives of three young children who had got into trouble in the water.
But the brave act cost the teenager – branded a ‘hero’ by onlookers – his life.
Cheng was enjoying the public holiday at the rural spot in Xinyang, at Henan province in central China, when tragedy struck. 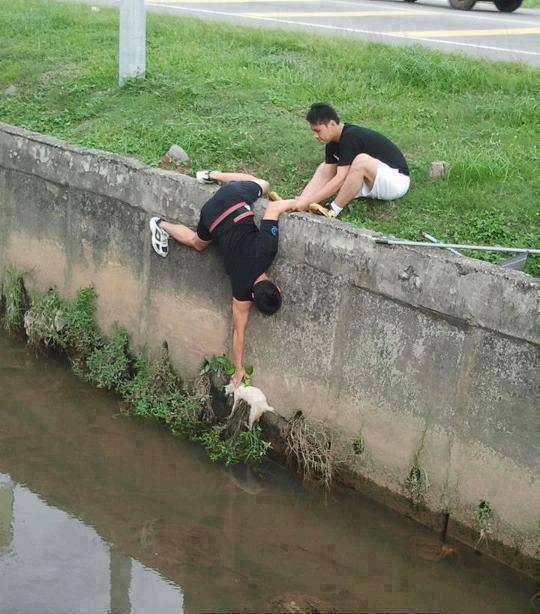 Two Men and One Kitten 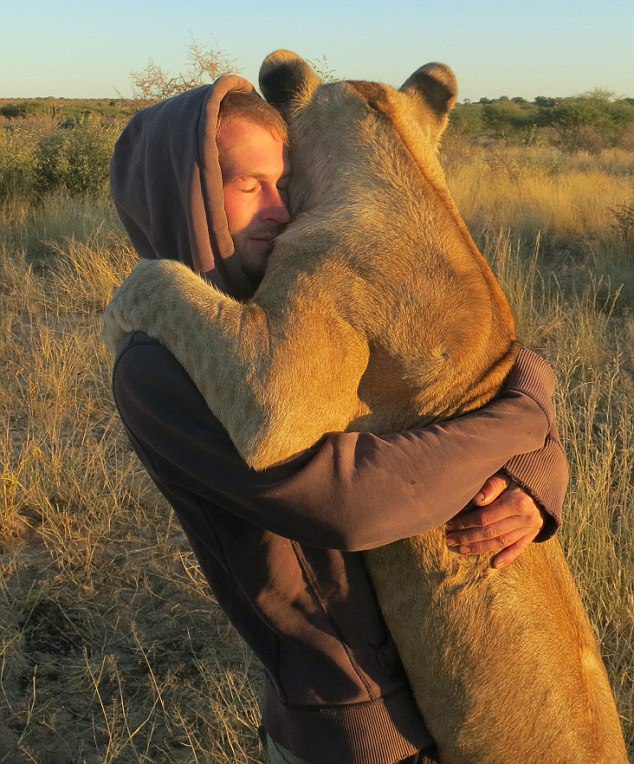 A Lioness Hugging the Kind Man Who Rescued Her
This is enough to warm even the wildest of hearts.
Deep in the African bush a lioness gives giant hug to [one of] the two men who saved her.
As a cub, Sirga was driven out of her pride and rescued by Valentin Gruener and Mikkel Legarth who could not stand by and watch her die.
Now the 110lb lioness has developed an incredible bond with the pair who are fighting to save her species in Botswana, southern Africa.

Not Today…
With only seconds to spare, a resourceful Chinese cop figured out how to rescue a suicidal woman dangling precariously from a ledge.
Authorities were called to the heart-pounding scene in Sanlitun in Beijing on Wednesday after a woman climbed to the top of a billboard and appeared to be prepared to jump, according to ZUMA Press, an independent photo agency that released the dramatic images.

A tiny kitten and a giant firefighter: A recipe for aww.
A firefighter responding to an apartment fire in Fresno discovered a lifeless kitty among the charred rubble. Being the good rescuer he was, he brought the kitten out of the house and begun to give it oxygen. Within about 15 minutes, he was able to bring the kitten back to life. And it was all captured on his helmet cam.
The kitten, aptly named Lucky, not only survived the fire, but was originally found in a shopping cart just down the street from the home.
How many lives does this cat have left?

and last but not least..

Just in time!
Redditor, ‘doctorpopcorn’ wrote;
“We ran out of toilet paper and asked our downstairs neighbor if we could borrow some. This is how it arrived, delivered to our door.”