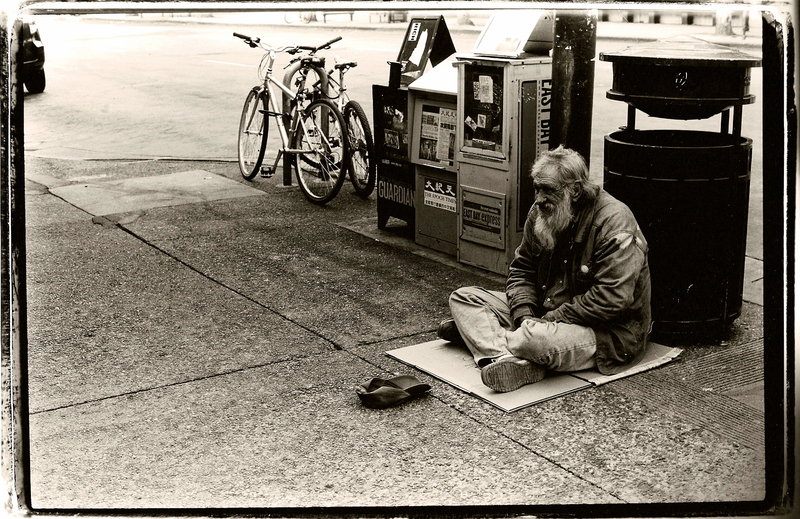 One of my New Year’s resolutions was to start helping more people, especially the homeless. However, I had trouble doing this because it’s like an invisible barrier has stopped me from doing so. Many years of social conditioning have taught me to look the other way and to completely ignore ‘beggars’, even though at my core I know that such injustice/inequality is wrong.

Tonight, I finally broke through the glass wall and began to help people. At first, it felt a bit awkward, but I saw a guy huddled against a wall and had some spare change in my pocket, so I just went for it.

The bleary-eyed man looked up at me and after a long moment of consideration, he answered: “A cup of tea would be nice.”

So I told him I’d be right back and fetched him a hot drink.

As I walked away, I felt very proud of myself and felt the urge to help others. However, a part of me tried to refrain from doing this because I’m not in the best financial situation myself at the moment, but I resolved to at least give away the money left in my wallet.

Then the most amazing thing happened. I was just about to approach another homeless guy when I saw that he was already holding a cup of tea! I then turned on to the next street where a Big Issue seller asked someone for enough money to get a cup of tea, to which the man obliged. It was like the universe was trying to show me that there are other generous people out there, so I don’t have to worry about helping everyone.

Of course, it is my intention to help as many people as I can, but there is only so much that I can do, so it is reassuring that there are other agents of kindness doing their bit.

After this, I encountered a fourth homeless person and gave him some money. He then started chatting and told me how someone had gave him their leather jacket earlier that evening, which he had protested against, but the kind stranger had been insistent. Yet again, another act of amazing kindness!

I sat down with him for a while and asked him how long he had been homeless etc. It soon transpired that he was an alcoholic and had been living on the streets for six months and was currently on a waiting list for sheltered accommodation. He said that even though our society is flawed, he takes responsibility for where he has ended up, which is very commendable indeed. After talking with him for a bit, I wished him all the best and carried on home, very pleased that I had finally followed through with a very important goal.

Now that I have broken down this barrier, I hope that I can help more people. Tonight, it quickly felt very easy and natural to share what I had, even though I don’t have much money to give. It is inherent within us all to be kind to one another, so I urge you all to share what you can, even if it is just acknowledging that these people exist.

by Nick Peterson of Ignite the Light Blog