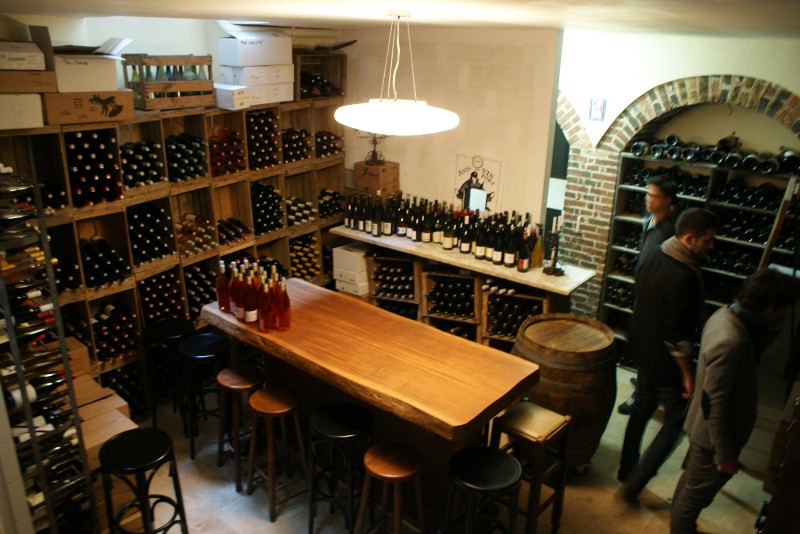 5 Hours spent in a wine cellar one block from the Bataclan on November 13, 2015 in Paris

It was our last night in Paris. I had the privilege of spending a week in this beautiful city, meeting amazing people, working on some incredible events, and spending a few days with my Mom, an experience I couldn’t pass up and did not take for granted. It was the longest I had been away from Casey since before we were married and the longest time I’d spent away from the kids by a landslide. A colleague of mine in Paris sent me a list of restaurants to try, and it just so happened that Tom and Lara were going to be in Paris on our last night, and so we had planned to meet up for dinner before my Mom and I left the next morning.

I made the reservation for 7:30 p.m. Probably 3 hours earlier than we had eaten dinner the entire time we were in Paris. Tom had just picked out our next bottle of wine and I went downstairs to the wine cellar to go to restroom. Our table was in the front. Tom and my Mom’s back were facing the window, Lara and I looking out onto the street.

When I came up the stairs, Lara had a look on her face that I hadn’t seen before. She told me that the waitress had told us to be calm, but that there were people killing each other in the street.

Because of the language barrier, we thought maybe we’d misunderstood. But as I looked outside, I could see people running, sprinting past the doors, looking back over their shoulders terrified. I knew something was wrong. It felt like chaos, and noise was building. Panic shot through me. The waitress tried to keep everyone calm while the Chefs ran to the front door, standing outside as a barricade, letting people who were running by in for safety. Then they locked the doors, turned off the lights and we were all ushered downstairs into the wine cellar. I immediately started to hyperventilate, crouched in the corner trying to make sense of what was happening as the reports started to come in. I think it was around 9 p.m.

Crouched in the corner, I held hands with Lara and a beautiful stranger. She was Muslim, and apologized, reiterating with sadness that this was not her true religion. She held my hand, looked me in the eyes, convincing me we would be safe.

Once the reports started coming in and we realized that the attacks were both targeted and random, fear started to swell. People were trying to get in touch with family, friends and colleagues; to ensure their loved ones were safe and to reassure them that they were safe too, knowing how close we were to the attacks.

Lara, Tom and my Mom all stayed incredibly calm, mostly focusing on trying to get me to breathe. I just kept thinking about Casey, and Henry and Evie. And our families. And our friends. About how little my babies are.

When we could hear commotion coming from up stairs, we would all become silent and the lights in the cellar would all be turned back off. More texts and messages and reports started coming in, and people began to realize the enormity of what was happening. We all waited in the cave, consumed by fear for five hours. When I texted Lindsay our location, she told me not to leave, but when I could, to head straight to the embassy.

So, for five hours, a room full of strangers, who didn’t all speak the same language prayed together, talked to each other, held hands, kept each other calm, hugged each other, tried to keep things light, offered wisdom (and wine), reassurance and condolences.

At 2:30 a.m. it was deemed “safe” enough for us to leave and the restaurant had to close. We were about a 30-minute walk home from the restaurant and no cabs or Ubers were running and the subway was on lock-down. So Tom, Lara, my Mom and I walked through the streets, terrified. On high alert, we tried to navigate our way around barricades and sirens. We waited on corners as police cars, motorcycles and ambulances rushed passed us. We actually didn’t know about the curfew and the gunman still at large until about half way home from the restaurant.

Tom and Lara walked us to our apartment and then on to their hotel, a six-minute walk from where we were staying. It was the scariest walk of my life. To say that I am grateful to have had three of the calmest people I know and love with me is an understatement.

The What-ifs that haunt us.

I’ve always been a little nervous, but my love of travel and my innate need to experience different people, cultures, and places overrode my “what-if” fears. I was in China during 9/11 and I remember that feeling of being so far away from home, being stranded and afraid. That fear has always stayed with me. But I locked it up, and shoved it to a place where I could ignore it. Friday night jarred that fear loose and set it on fire. It’s still consuming me.

I have never felt so far from home, but unlike 9/11, this time home had an entirely different meaning. Home means Casey. And Henry. And Evie. And so many people who I love so much. Our family. Our friends who are like family. Our community. Home means tucking my babies in at night. Home means kissing my husband and listening to him breathing beside me as he falls asleep. Home means chaos and laughter and family hugs. Home means every single tiny detail that makes up my days, and conversations, and family and friends. Every bit of laughter and love. Home is made up of love. And I’m feeling that Love more than ever.

I can’t begin to process all of the emotions running through my mind, heart, and subconscious. I am beyond thankful and grateful. But I am also so sad. So profoundly sad. For Paris. For the world. For the people who lost people. For the people who lost hope. For the people that will always be scared. For our children, who are growing up in a world where no place feels sacred enough. No place is guaranteed to be safe. I want that so badly for them. For all of us.