“This is Pickles. This sweet girl is currently in Newport, Arkansas in the care of the Jackson County Humane Society.

We estimate that she was born about July, 2013 so she is approximately one year and three months old. She looks to be a Terrier and Chihuahua mix and weighs fifteens pounds.

She has soft golden-brown fur and big brown eyes. Check out this sweet baby in her pictures. What a lovebug!

Pickles was rescued from a home where she was not given the loving care and affection she so deserves.

When she first came to us she was very scared, but after only being with us for 24 hours she came out of her shell and is a very loving little girl.

She will lie quietly at our feet for hours, and follows us wherever we go. She is very special and very loyal. She thinks she is a big dog in a little body!

Pickles is spayed and up to date on all vaccinations.

Do you have room in your heart and home for this little girl?”

I’d been looking for a dog at all the local shelters in Maine, thinking that Petfinder, in general, might be kind of excessive.

There were dogs around that needed homes, why should I look halfway across the country? But after a few false starts, I started looking at the website in hopes that when I’d found my furkid, I’d know.

Maybe my willingness to take a chance, to extend my hope beyond state lines, came from having lost the love I’d become so accustomed to in human form. It wasn’t that I couldn’t be alone — I’d been alone for more of my life than I’d been with others. I wasn’t a pack animal by nature, despite my human form. But I wanted a companion. I wanted warmth in the bed at night again. I wanted long walks, happy yips and tail-wags.

The search was not for any particular breed, (though small was kind of important, as suits apartment living) or gender (though I’d basically only ever had male dogs and was, I suppose, used to their temperaments) or even personality — I just wanted to know that the dog was the right dog.

I didn’t know how I’d know until I knew.

The shelter called her Pickles. She was a honeyed little mutt with a look of mischief in her big brown eyes and the most deliberate, shit-eating grin I’d ever seen on a dog’s face.

I kept trying to skip by her. I tried to look elsewhere.

But she was the one.

She was in Arkansas, though. And I was in Maine. And apparently, in the world of dog-acquisition, there are transports — giant eighteen wheelers — that bring dogs all the way up the eastern seaboard. I can’t imagine it’s a first-class way to travel, but it allows these dogs to have more chances to be adopted — particularly important in the southern states where kill-shelters are a thing (they are not a thing in Maine).

The dog-truck came up as far as Kittery, which is a good two-hour drive from where I live on the coast. It wasn’t an unreasonable sojourn, but I did have to borrow my aunt and uncle’s SUV, to accommodate a crate in case the dog tried to escape as we zoomed along I-95.

Hillary, my best friend of twenty years, was to accompany me. It was only suitable — I’d been with her as she labored to bring her son into the world, shouldn’t she be with me when I adopted and brought home a tiny creature to love? The trip, of course, was rife with mishaps, and I should have expected as much. Hillary and I had a consistent history of getting into a car, cranking the tunes and finding ourselves ensnared in some kind of on-road madness.

We stopped for gas at a familiar rest-stop off the highway — one that, in the bygone days of our youth we would run to for extremely large Cool Pops. This was all fine and good, except that the gas cap wouldn’t come off.

It just. . .wouldn’t come off. It was as though it was cemented in place and by this time, we were running on fumes as it was. The prospect of not having fuel enough to get to Kittery made my heart race — how could I let down this dog? This southern belle of a chihuahua-something-or-other that had ended up in a shelter just after her first birthday because her owners were offended, rather than impressed, when she escaped the backyard and fell in a culvert (where she proceeded to almost drown, more on her hydrophobia later).

Hillary and I proceeded to scream in tandem down the highway toward the nearest auto-parts store. We figured if we could find a mechanic and get a new gas cap, someone ought to have a tool that could get the stubborn gas cap off posthaste.

We chugged along in nail-biting silence until we found the store and ran inside as the November wind rustled leaves in the parking lot. We explained the situation across a single breath, and waited for them to devise a solution.

An elderly mechanic, as seems to always be the case in my life, had the most satisfying and destructive solution: he just bashed the living hell out of the gas cap with various wrenches and hammers. It was oddly satisfying to see it pummeled to smithereens, but time was dribbling away from us and we still needed to gas-up and finish the last leg of our drive.

I started to worry that if we were late, they might make the poor dog drive all the way back to Arkansas. The poor thing had already been on the transport a day and a half.

New gas-cap in hand, the old man waved us on and we called the transport organizer to let him know we were on our way. The truck was waiting at the rest stop in Kittery, just beyond state lines, and had been running late. So, effectively, we were right on time. 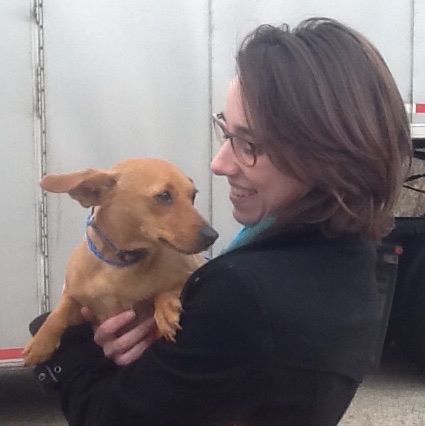 She was so much smaller than I’d thought she’d be, which was funny, because that’s exactly the same thing we’d said about Hillary’s son when he was born. But, not unlike when she met her baby for the first time, meeting this little dog, who I’d named Whimsy, tugged at a particular chord of my heart. One of recognition, perhaps as though we’d known one another in a previous life. It was a bizarre thing, having such an emotional response to meeting a dog, but it happened and I won’t deny that I felt a kinship with her straight away.

Maybe it was the chihuahua in her, or the unbridled fear of a new life, but she shook in my lap the entire ride home. I’d planned ahead, the way any new mum does, and when we arrived back at my apartment she had all kinds of new treats, toys and cozy things that I hoped she’d at least be able to sleep.

She did — for all but the thirty seconds or so around 1:30 am when she woke up and promptly vomited all over my face.

The next day, she settled in a lot better than I’d’ve given a dog credit for. She proved to be very adaptable, and I’m sure that’s in part because she’d been in a very nice foster home before coming to me and she was still very young. She found her toys agreeable, learned her potty commands with ease, and decided that she’d be fine sleeping in her little fuzzy bed during the day, but at night we both preferred sharing my queen-sized bed.

There was only one problem — her crate. The large, metallic prison that soon became her mortal enemy. Even though she was but fifteen pounds of furry Chiweenie, she managed to completely decimate the structure one afternoon while I was running errands. We’d built up to my leaving for longer periods of time, but she couldn’t stand being locked up. I’d given her her food there, left fun toys and special treats, made it cozy and cave-like — but she was too smart. She wanted to be able to see out the window, her little triangles of ears popping up from behind the curtains whenever I pulled into the driveway.

So, we forgot about the crate. And in truth, things got a lot better once I let her roam free. Slowly, I opened her up to various parts of the house. I did have to devise a creative barricade for my open-but-tiny kitchen. Not even because I didn’t trust her, just because I couldn’t have her underfoot while I was maneuvering boiling pots of water and teakettles. One too many close calls of that and I decided kitchen was eternally off-limits.

She didn’t mind that, though. She liked to sit in the window and watch the world go by, or curl up next to me on the couch, cozy up in her bed under my desk while I worked. She was my little shadow, and even if I was going out somewhere that she couldn’t go into, she was always delighted to go for a ride, curling up for a snooze on my lap as the ocean air blew in from the window.

It’s cliched to say that she saved me rather than the other way around, but it’s true, and I think many people who love dogs know how true this is.

Prior to having her in my life, certain things experienced in the last twelve months would have stood to push me into a depression worthy of the suicidal ideation that had become my security blanket, my secret joy in death planning. It tempted me, and I would be awake in my bed in the dark, velvety night, pain ripping through me, my mind tightening with anguish —

— and then, a little paw dreaming of chasing rabbits kicks me in the butt.

Or she army-crawls from the depths of the blankets to rest her head on my chest, looking up at me with her soulful brown eyes.

These nights, these days, when I hate living I still love her. And I love her more than I love the thought of eternal silence or boundless darkness. I wake up in the morning and drag my sorry-ass out of bed so that she can pee and have her kibble.

I know she’s only two years old (they didn’t know her real birthday, but said it was sometime in the summer, so I chose June 22nd so she would share a birthday with Meryl Streep) but I do worry about how I’ll survive without her one day. This dog has become a part of me in a way that a friend, a partner, a family never has. She’s in tune with me, understands my pain without judgment, revels in my joy boundlessly, appreciates the simple pleasure of a walk in the balmy morning — or the art of chasing leaves in autumn. She, unlike the aforementioned human love of yesteryear, appreciates when I rid her of morning eye-boogers.

One that is all at once devilish and pure and clever and kind.

She is, as her name implies, fanciful and quaint — a comedienne, a tiny furry dancer, a comrade, a soothsayer, a warm comfort in the dead of night. 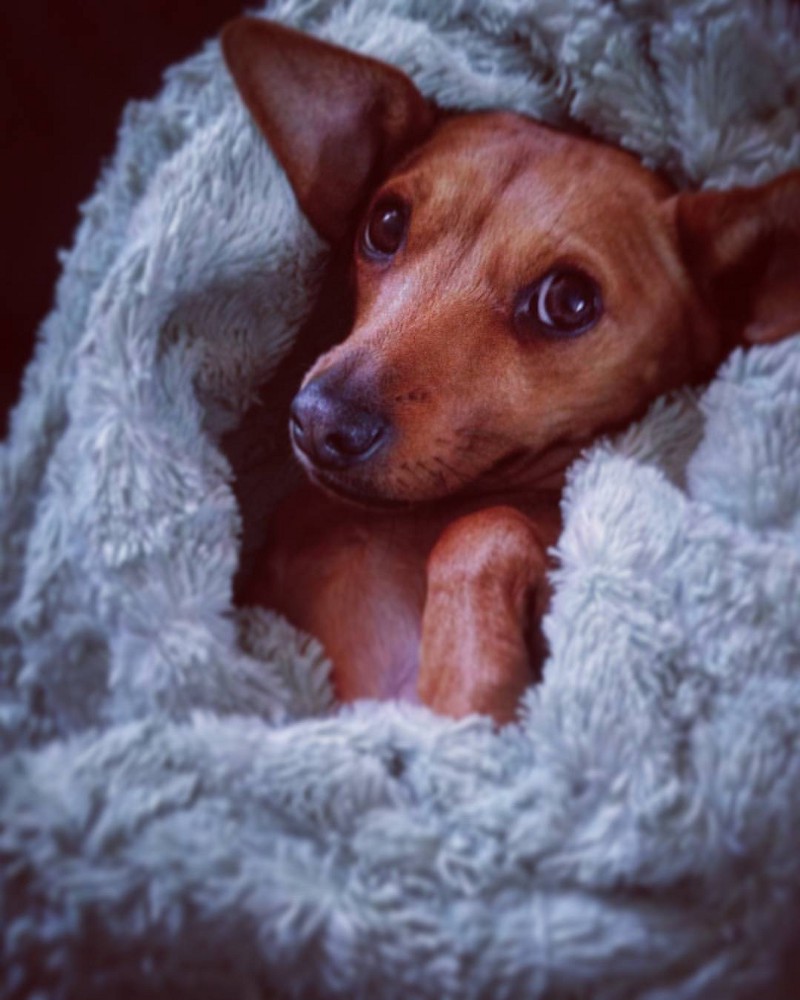 Sometimes I try to imagine where her soul was before it rejoined the mortal coil as a half chihuahua-half-something-or-other. I’m almost certain she was human, and probably a whimsy in a bustle and boots, cavorting through the streets with a spring in her step and her ears perked up, listening for where life would take her next.

That’s how I know we’re kindred spirits, you see; I was once a whim myself.