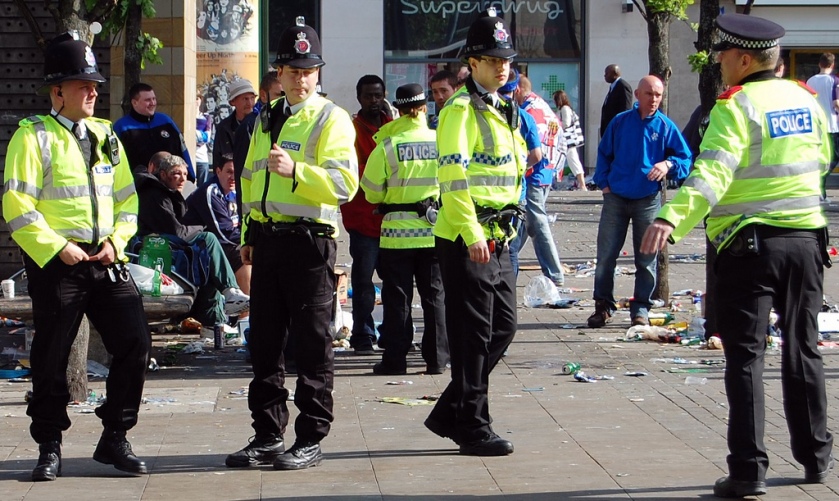 Two things that have been on my mind for the last few days.

And I need to talk about both of them.

And it troubled me.

You can find it via this link:

The thing is, she’s absolutely right.

Let me tell you what I’ve seen.

I am the Police Match Commander at a Premier League game.

On the CCTV, we pick up a group of youngsters in the back row of the Away Section – a girl and a small group of boys. I couldn’t tell you exactly how old they are – but they don’t look much more than 16 or 17.

And something about their behaviour just isn’t right.

The camera stays on them and, to our absolute astonishment, the girl ducks down and appears to be performing an oral sex act on one of the boys. In broad daylight. In front of tens of thousands of football fans.

We respond as we should – motivated primarily by a concern for the welfare of the girl – but I’m in state of complete disbelief.

I’m a Superintendent at Islington in North London. Reports come through of a Gang Rape.

There can’t be many more heinous crimes.

A group of teenage boys have got access to a flat – and they’ve prepared it in advance.

Their unsuspecting young victim is lured inside and repeatedly raped – by one boy after another. It is an utter violation of the most horrifying and terrifying kind.

They throw her out and then proceed to forensically clean the location – attempting to remove every last trace of their wickedness.

And I am speechless.

I’m the Borough Commander for Southwark in South London.

Reports come through of a 14 year old boy alleging that he’s been raped.

A male suspect approached him in the street and produced a knife. He led him off the street and into a nearby estate. He took him up some stairs and, in the vicinity of one of the open landings, raped him.

In a public place, in the middle of the day.

Within about 48 hours, conclusive forensic evidence is secured – and a suspect is identified.

I can’t quite describe the depth of feeling as I write these things.

I am a police officer; I am a dad; I am a human being.

And these things are happening on my watch:

There’s so much that might be said about the catastrophic sexualisation of young people – but words honestly fail me.

For God’s sake, wake up.

There’s only so much picking up of the pieces that policing can do.

And it’s not just the sex that bothers me. It’s the violence too.

Much talk about gangs and knives in the last few days. And we are absolutely right to be concerned.

I have stood at too many murder scenes – in the haunted places where young men have lost their lives.

It is the summer of 2007 and London finds itself in the midst of a horrifying series of teenage murders.

I am walking along the street near West London Magistrates Court, deep in conversation with a member of staff from a nearby Youth Offending Service.

She begins talking about one teenage boy who is giving her and colleagues particular cause for concern.

I look at her with what is, I imagine, a fairly puzzled expression on my face.

She goes on to explain that this boy has played so many violent video games – in which he had been killed, only to get up and carry on shooting – that he genuinely has no concept of the finality of death.

My bemusement turns to disbelief – until I see it for what it is.

He has no other frame of reference; no understanding of true consequences; no comprehension of the fact that if he were to carry a knife – even for his own protection – the person most likely to be stabbed with it is him; no insight into the fact that joining a street gang is likely to make him less safe, not more; no realisation that real life just isn’t like a video game.

I am the Borough Commander in Camden, talking to a local Youth Worker. She is employed by an exceptional charity and is working in some of the Borough’s secondary schools.

She tells some powerful stories.

On one occasion, she headed into a local Girl’s School to meet with a particular group of teenagers for the first time. She was looking for a way to get the conversation started and, with an all female audience, she settled on the subject of relationships.

She began with a simple question: ‘What makes for a good relationship?’

And, to her surprise, she was met with complete silence.

No one said a word.

Finally, one teenage girl spoke up and – in response to that simple question about the makings of a good relationship – she said,

‘One where he doesn’t hit you.’

Pause and think about her answer for a moment. I’ve related that short story to a number of people on a number of different occasions and I never cease to be horrified by her reply.

Even if you were to try to argue that her views were not broadly representative of her peer group, the fact is that this young woman is growing up in our society – and the sum total of her aspirations for a relationship is the faint hope of avoiding violence.

And, of course she isn’t the only one.

I’m the Night Duty Inspector at Fulham and I’m last man standing. Everyone else is in with prisoners or otherwise off the road.

Down the side street next to McDonald’s on the North End Road. I can’t be more than 400 yards away. Just one of those coincidences.

Big, deep breath. If not me, then who?

I park the car on the main road and walk the last bit. Cautiously. Hesitantly. I can’t hear anything.

But you just never know what you’re going to find.

I put my head round the corner. A group of armed men standing round a saloon car that’s come to a stop diagonally across the road.

A long split second later, I quietly breathe out. They’re the good guys – in plain clothes.

They ought to have told us they were running an armed surveillance job – targeting guns and drugs – on our ground, but I’m too relieved to be annoyed.

They’ve put in a hard stop on the suspect vehicle they’ve been following – and the shots reported by members of the public were Hatton Rounds going into the tyres of the vehicle to immobilise it.

We exchange professional pleasantries and then I notice one of the bad guys – the rear seat passenger in the car.

How on earth did he get involved in something this serious?

These are our children.

And there is a loss of innocence in our society – on our streets and in our homes.

It breaks my heart.

John Sutherland is a Met Police Officer, Londoner, Family Man and a Believer in Hope.

Read more on his Blog.