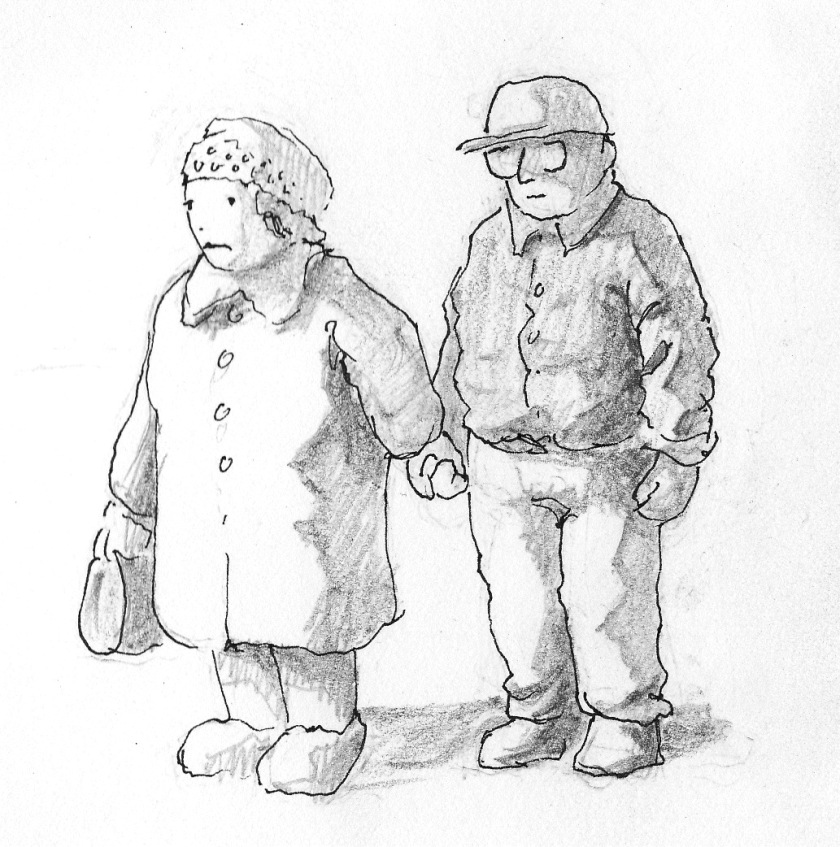 This is  true story from the assisted living facility where I work. The names have been changed to protect the privacy of the residents. Of all the stories I could tell you, this is one of my favorites.

I have worked in nursing homes and assisted living facilities for many years. I have seen many things and gotten to know many people. Many things have touched my heart but this one is really special.

Richard lived with his wife, in our  assisted living facility for 10 years. They had their own apartment and were a high functioning couple.

A few months ago, the wife passed away suddenly. We were all quite shocked, but none of us were more upset by her sudden death, than Richard was. His mental state began to quickly decline, after his wife’s death.

He loved her very much and he relied on her to keep his schedule straight. She made sure he got dressed, came down for meals on time and that he took his medications.

Richard’s wife was the key to his ability to stay clear and oriented. After she passed away, Richard became very disoriented. He looked for her every day, and every day we had to tell him that she had died. He just could not remember.

He became confused about meal times and he did not know how to organize his day. He wandered around the floors of the building and we would have to find him to remind him it was time to eat.

Molly is awesome and the nicest, most considerate person you will ever meet. She ended up living in our Alzheimer’s Unit, after her family was afraid she would wander away from the house and get lost. She has very mild dementia and most of the time she is very functional. She helps us fold laundry and she even sits with other residents when they are sad, in order to comfort them.

But every day around 4pm, Molly used to tell us she had to leave. She would suddenly believe that she was 16 and her father, who had long since passed away. was waiting for her. She would insist that she better not be late or her father would be angry.

It is not uncommon with dementia that the person will believe they are decades younger than they are. They still believe that their parents are alive and well, even though they passed away 30 years ago.

So anyway, Molly would argue, cry and become very afraid of her father being angry with her, for being late. Every day, Molly went through this mental / emotional anguish. She would cry and be so upset every single day from 4 pm until about 6 pm.

Richard got worse and the nurses found him running through the halls without his walker. He fell and became injured. Richard was no longer safe to be out in the apartment areas. He now had to be moved to the Alzheimer’s / dementia unit.

Richard was at dinner the first night and he was fine. He came out to the living room area to watch a movie with us. He ended up sitting next to Molly.

Molly was so happy when she saw Richard. It was mostly women in the unit at that time and a man was something special! Molly sat with him and talked with him about all kinds of things. From then on they say together at dinner every night and also during movie times.

It was amazing ! Molly stopped getting upset every day. . She completely forgot about her father, and she stopped trying to run away every day. She was happy being in our unit with Richard. She began to look after him, kind of like his wife used to.

She reminded him that he needed to take his walker with him, when he walked somewhere. She reminded him when it was time for dinner and walked with him to the dining room. If he needed anything, she would ask one of us to help him.

Richard became happier and eventually stopped looking for his wife. He was happy to have Molly as a friend. He willingly accepted her kindness and let her look after him, in the best way she knew how.

So, Molly is no longer trying to leave. Richard is no longer looking every day for his wife, and having to be re-traumatized day after day with the news that she died.

Last week I looked over to see Richard and Molly sitting on the sofa. Molly had her head resting peacefully on Richard’s shoulder and they looked very natural together. They have found new kindness in their lives, and it has made a huge difference to each of them. This is compassion, love and kindness at it’s best.

Now you know why this is and will always be, one of my very favorite stories. Of all the things I have seen over the years, this was truly a real miracle. Richard and Molly are probably watching television together as we speak.

Think about it, one day we will be that old too.

You can read more of Annie’s writings at GentleKindness’s Blog.

Also by the same author on Kindness Blog: